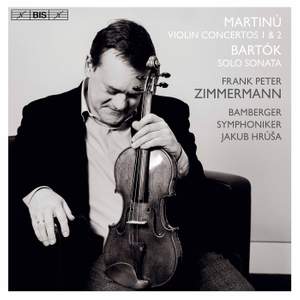 Zimmermann has fully absorbed the slightly eclectic style of [the First Concerto] and produces a performance of conviction, not to mention dazzling virtuosity. Hrůša accompanies with understanding... — BBC Music Magazine, February 2021, 5 out of 5 stars More…

On the present disc, Frank Peter Zimmermann, one of today’s most highly regarded violinists, performs works by two Central European composers that also exemplify various currents in classical music during the period 1920-1950. Although it only received its first performance in 1973, Bohuslav Martinů’s Violin Concerto No. 1 had been composed 40 years earlier in the neo-classical idiom championed by Stravinsky. In contrast, the composer’s Second Violin Concerto (1943) is written in a more lyrical vein, partly to suit the playing style of Mischa Elman, the violinist who commissioned it. In both works Zimmermann is partnered by Bamberger Symphoniker under the orchestra’s chief conductor Jakub Hrůša, one of the leading Martinů conductors of today. The disc closes with a central work in the twentiethcentury literature for solo violin, Béla Bartók’s Sonata for Solo Violin. Composed in 1944, only a year before Bartók’s death, it is a deeply personal statement which fuses the overall layout of Bach’s solo violin sonatas with Hungarian folk tradition with results that are as fascinating to the listener as they are challenging to the performer.

Zimmermann has fully absorbed the slightly eclectic style of [the First Concerto] and produces a performance of conviction, not to mention dazzling virtuosity. Hrůša accompanies with understanding and flexibility...[In the Second] the sprung rhythms of the first movement and robust ebullience of the finale are brilliantly captured in one of the most satisfying recorded performances available.

Equipped with a technique that he could easily use to dazzle us, Zimmermann prefers to make thoughtful musical choices. Listen to the way he muses over the theme of the central Moderato movement, never drawing attention to anything other than Martinů’s intent, or how playfully he treats passages of figuration that can fall so easily into rote pattern-making. Hrůša is similarly subtle in his response.

Hrůša is as fine a Martinů interpreter as anyone on the podium currently...What impresses most here, however, is the clarity and naturalness of Zimmermann’s performances, remarkable in combining an intimate knowledge of the music (the result of long study) with a freshness of approach. This is, for me, the top recommendation for these two works and, frankly, is how Martinů should always be played.