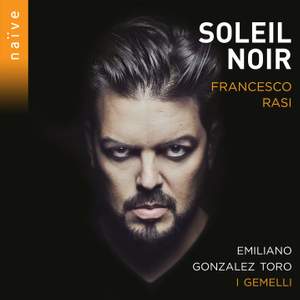 Many vocal skills we now admire in opera were born in the early 17th century. These performances centre upon the techniques of the early solo singer-composers, wonderfully resurrected here by... — BBC Music Magazine, July 2021, 4 out of 5 stars More…

Composer and poet, virtuoso singer, creator of the title role of Monteverdi's Orfeo, embodiment of the clair-obscur of the Italian Renaissance and a character as complex as its era: Francesco Rasi (1574–1621) undoubtedly played an important role in the birth of the Opera at the beginning of the 17th century. With “Soleil Noir” the tenor Emiliano Gonzalez Toro and his ensemble I Gemelli (concentrated here in their most intimate formation with solo voice, viola da gamba, lute and harp) present a programme in his honour.

The album includes works by Giulio Caccini, Marco da Gagliano, Giuseppino del Biado, Sigismondo d’India, Andrea Falconieri, Carlo Gesualdo, Claudio Monteverdi and Jacopo Peri. Rasi sang his own melodies and accompanied himself on the lute or the harp – in part, the underlying poetry also came from him. Thanks to his in-depth study of the text and the versatile voice of Emiliano Gonzalez Toro, singing like that of Francesco Rasi is now at the centre of music, opening up a world of flashes of light beyond darkness to the listener.

Many vocal skills we now admire in opera were born in the early 17th century. These performances centre upon the techniques of the early solo singer-composers, wonderfully resurrected here by the ravishing and sometimes mercurial vocal wizardry of the Swiss-Chilean tenor Emiliano Gonzalez Toro...exceptional musicianship abounds.

Gonzalez has a beautiful voice, which he deploys with skill and sensitivity. The roulades are dispatched with vigour and accuracy, and time and again I find in my notes the word ‘delicacy’.

This is a remarkable homage to the tenor Francesco Rasi, creator of Monteverdi’s Orfeo in 1607, and a composer of note himself...brought vividly to life in a narrative programme by Toro and his dramaturge, Mathilde Etienne.