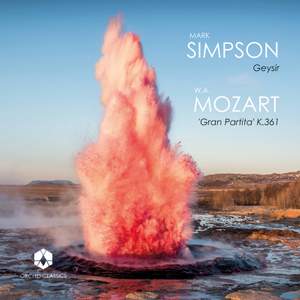 In a teeming catalogue, this new Gran Partita more than holds its own. But the clinching factor for many will be Mark Simpson’s companion piece: a tour de force of wind colour and carefully controlled... — Gramophone Magazine, February 2021 More…

Recording of the Week,  Mark Simpson's Geysir and Mozart's Gran Partita for Winds

Mark Simpson leads an ensemble in radiant performances of two works for wind instruments: his own composition, Geysir, alongside Mozart's Gran Partita.

The British composer and clarinettist talks about his exciting new work Geysir, conceived as a musical response to Mozart's Gran Partita.

A stunning pairing of Mozart’s glorious ‘Gran Partita’ Serenade with a work written specifically to be performed alongside it, Geysir by the exceptional clarinettist-composer, Mark Simpson. Mark Simpson’s simmering, volcanic Geysir was inspired by the rich opening chord of Mozart’s ‘Gran Partita’, and by its bubbling clarinet writing, which develop into what Simpson describes as a “flurry of colour and harmonic shifts”. As a clarinettist himself, writing Geysir “was an instinctive thing – it never felt like trying to overcome any limitations… I’m very proud of it…” Mark Simpson, who performs on this release alongside a line-up of other extraordinary musicians including oboist Nicholas Daniel, was the first ever winner of both the BBC Young Musician of the Year and BBC Proms/Guardian Young Composer of the Year competitions in 2006. By 2019 he was composer in residence at the Leicester International Music Festival, and is currently working on a Violin Concerto for Nicola Benedetti and commissions for the LSO, WDR Sinfonieorchester and RSNO.

In a teeming catalogue, this new Gran Partita more than holds its own. But the clinching factor for many will be Mark Simpson’s companion piece: a tour de force of wind colour and carefully controlled tension that makes an immediate impact and reveals more and more on repeated hearings...His elite players do him proud, in a performance of risk-taking virtuosity.

The skill and virtuosity with which the entire ensemble performs their parts is quite something, and the balance of sounds and textures is simply superb...I would have been happy recommending this recording based purely on Geysir alone, so it's even more pleasing that it is followed by a glorious account of Mozart's Gran Partita…Magnificent!