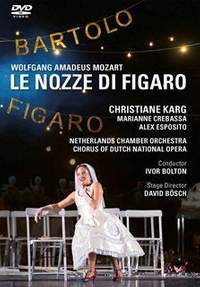 Le nozze di Figaro is one of the most successful comic operas ever. Director David Bösch is a born storyteller. He likes to focus on the classics, and is known for his poetic approach. In this new production of Le nozze di Figaro, the hectic, bubbly story of Figaro’s eventful wedding party is visually interpreted in a revolving stage set.

Le nozze di Figaro is based on Beaumarchais’ play La folle journée ou Le mariage de Figaro, which shook up the feudal French society to its core. For Mozart’s opera, librettist Da Ponte removed the sharper edges in order to mollify the censors, and Le nozze di Figaro was eventually received with great enthusiasm. Passages had to be repeated so often by request that Emperor Joseph II himself enforced a clamp down on the number of encores!

Alex Esposito will sing the title role opposite Stéphane Degout as Count Almaviva. They will be singing alongside Eleonora Buratto as the Countess, and Christiane Karg (DNO debut), as Susanna, Figaro’s bride.