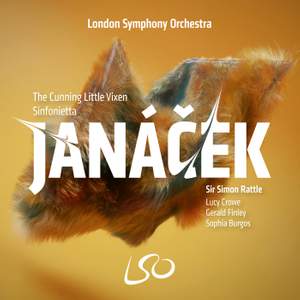 If this Vixen is good, the Sinfonietta is outstanding – arguably the best on disc, though you need to experience the work in a concert hall with the nine trumpets blazing. They’re supremely sophisticated... — BBC Music Magazine, December 2020, 4 out of 5 stars (Performance) / 5 out of 5 stars (Recording) More…

Melodious and charming, The Cunning Little Vixen is a work rooted in Czech history and folk music; a sentimental journey through the cycles of life. For Sir Simon Rattle, it's a deeply personal and emotional work. "It's the piece that made me want to become an opera conductor... and still one of the pieces that reduces me to tears more easily than any other," says the LSO's Music Director. Recorded with an outstanding cast during semi-staged performances, this recording is the second in an LSO Live series showcasing acclaimed collaborations between Rattle and the celebrated stage director Peter Sellars. Towering fanfares open Janácek's Sinfonietta, an ode to the composer's hometown of Brno in the now Czech Republic. It's a portrait composed for a national celebration of Slavic culture, with Janácek's love of musical tradition evident in dancing strings and celebratory brass.

If this Vixen is good, the Sinfonietta is outstanding – arguably the best on disc, though you need to experience the work in a concert hall with the nine trumpets blazing. They’re supremely sophisticated as well as clarion here; Rattle, being a sound man first and foremost, makes every odd instrumental combination tell and there’s a drive sometimes lacking in the Vixen.

With pinpoint playing from the LSO and close, detailed recorded sound, this is a Vixen with sharp teeth as well as sharp ears… The sense of dramatic vividness is conveyed superbly by the cast, led by Lucy Crowe’s impulsive Vixen, brimming with joie de vivre and mischief and singing with airy ease…The generous coupling is every bit as compelling: a taut account of the Sinfonietta that bristles with nervous energy and exultant joy… All in all, an outstanding release, and a rewarding celebration of this wonderful composer’s art.

Rattle’s conception of the opera has become broader and more expressive over the years, and the result is perhaps the most overtly lyrical account of the opera on disc. The principals clearly relish this...Crowe’s vocal characterization reveals someone who is really inside the role as well as having just the right voice for it. Gerald Finley’s Forester is not only beautifully sung but also very original.

Sometimes when listening to a new recording for the first time, you can tell more or less straight away that what you are about to hear is going to be pretty special...The opening prelude, a brilliant representation of a forest teeming with life, is extraordinary in Rattle's hands: The LSO strings sound electrifyingly insectile..Crowe perfectly captures the quixotic, scheming moods of "Sharp-Ears...For me, though, the standout is Gerald Finley as the Forester.

Crowe makes the text integral to her vivid performance, and Gerald Finley’s nobly sung Forester is up there with [Thomas] Allen’s. Sophia Burgos’s soprano Fox sounds perhaps too like Crowe, but all of the small parts are well characterised and the orchestra play with heart, soul and joy.

It’s a warm, wonderfully detailed performance, superbly sung by all involved, in which Rattle’s admiration for Janáček’s score shines through; Cunning Little Vixen was the piece, he’s said, that made him want to conduct opera, and that affection certainly comes across.

Crowe can be infinitely touching; and you can hear how astonishingly free her voice is, particularly in the second act. Crowe’s voice also works supremely well with that of the Puerto Rican-American soprano Sophia Burgos, who takes the role of The Fox. The Forester is Gerald Finley, who fully realises the importance of Janáček’s speech rhythms in the vocal writing. A fabulous performance of huge character and conviction – far more than a momento of a clearly unforgettable occasion.