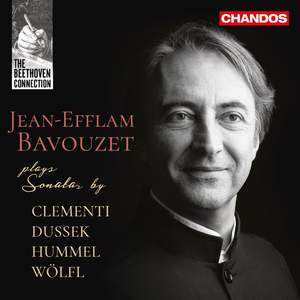 This recording embodies a brilliant idea, brilliantly carried out…Each of the works that Bavouzet has programmed is a revelation, and reflects the fundamental changes that were taking place in... — BBC Music Magazine, August 2020, 5 out of 5 stars More…

In the 250th Beethoven anniversary year, Jean-Efflam Bavouzet has chosen this programme of works by contemporary composers to illuminate and contextualise Beethoven’s extraordinary output for piano. In his explanatory note for the album, the pianist writes: ‘Just as a mountain peak is always surrounded by other perhaps less lofty but no less fascinating summits, the major works of Beethoven are not isolated rock formations rising from the desert, but, as it were, “Himalayas”, forming part of a range in which other mountains might be the best pieces by contemporaries such as Clementi, Hummel, Dussek, and Wölfl. These composers all knew Beethoven well and were in contact with one another. It is essential to know and to make known their music in order better to understand and more thoroughly appreciate the lingua franca of the music of the time, which in turn is part and parcel of the “spirit of the age”, and to be aware of that which unites them, as well as to recognise that which differentiates them and renders each unique. In this year of plentiful Beethovenian commemorations, it appears to me natural, indeed essential, to pay admiring and enthusiastic homage to these composers, each of whom, in his own way, followed his route to the summit.’

This recording embodies a brilliant idea, brilliantly carried out…Each of the works that Bavouzet has programmed is a revelation, and reflects the fundamental changes that were taking place in pianism around the turn of the 19th century.

Jean-Efflam Bavouzet, who has given us a highly acclaimed cycle of Beethoven’s complete piano sonatas, is quite possibly more attuned to the intersections of harmonic and motivic materials between these works than other pianists might be who have explored Beethoven but not necessarily Wölfl, Clementi, and Hummel. Bavouzet’s Beethoven Connection is more than a musical feast for the ears from a most estimable artist, it’s also food for the brain.

Bavouzet’s keen intelligence and pristine musicianship are evident throughout, not least in his vivid delineation of the individual characters of these four composer-pianists…In Hummel’s overtly virtuoso Op 20 Sonata from 1807, Bavouzet’s focus is on its extraordinary pathos and startlingly original formal procedures...In the Andante cantabile, Bavouzet gives full vent to Wölfl’s unabashedly operatically inspired writing.

Their music is often harmonically and expressively bold, its structures hold up well and it advances pianistic virtuosity. Bavouzet’s advocacy is passionate and intelligent, and he includes an appendix illustrating points made in the sleeve notes.

The top attractions are a Clementi sonata with a Bach-haunted adagio, a brooding, proto-romantic sonata by Dussek, and Bavouzet’s fleet fingers and feet working his Yamaha CFX concert grand.