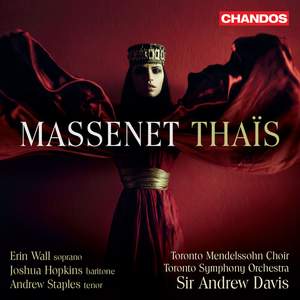 To Thaīs herself Erin Wall brings a clean, pliant soprano used with discretion and judgement…Dark of presence, Joshua Hopkins makes a vehement Athanaël…Davis presents a perceptive account of... — BBC Music Magazine, August 2020, 5 out of 5 stars More…

Following acclaimed performances at the Edinburgh Festival and then in Melbourne, Sir Andrew Davis’s recording of Massenet’s opera Thaïs features an outstanding cast, and exceptional performances from his Toronto forces. Written shortly after the premiere of his masterpiece Werther, Thaïs was composed for the Californian soprano Sybil Sanderson who gave the premiere at the Paris Opéra In 1894. Sanderson's performance was a triumph, but the opera itself had a mixed reception. After Massenet revised it in 1898 it went on to worldwide success in the years leading up to World War I and has enjoyed continuous and growing success in our own time. The role of Thaïs has drawn many great artists, including Mary Garden, Geraldine Farrar, Maria Jeritza, Leontyne Price, Beverley Sills, and Renée Fleming. According to the Financial Times, ‘Erin Wall is the Thaïs of one’s dreams, wielding a soprano of radiance, pristine beauty and tingling top notes”, and she is joined on the recording by Joshua Hopkins in the role of Athanaël, while Nicias is sung by Andrew Staples. Recorded in Toronto’s Roy Thompson Hall, following live performances, in Surround Sound.

To Thaīs herself Erin Wall brings a clean, pliant soprano used with discretion and judgement…Dark of presence, Joshua Hopkins makes a vehement Athanaël…Davis presents a perceptive account of one of Massenet’s best creations, the Canadian orchestra offering fine-textured playing as they respond with assurance to the composer’s unerring gift for scene painting…It surpasses many earlier efforts not only in terms of casting and conducting, but also in taking one of Massenet’s finest scores seriously.

[Davis's] understanding of Massenet’s often deliberate blurring of the dividing line between sensual and spiritual experience is unquestionably acute. The playing is excellent, with a refined sensuousness of texture throughout…[Hopkins's] is a remarkable, unforgettable performance, sung with consistently expressive beauty, and quite superbly characterised.

The sound is sumptuous, and the playing of the Toronto Symphony Orchestra is rich and refined…[Wall's] is a beautiful instrument, with an appealing shimmer to it, and it’s a serious and moving assumption that seeks to flesh out the character into more than just a caricature of carefree exotic charm. She has opposite her a fine Athanaël in the form of Joshua Hopkins; he has a big, handsome-sounding baritone and sings generously.