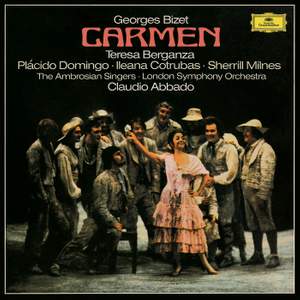 Abbado’s years with the London Symphony Orchestra resulted in three celebrated sets with the Spanish mezzo Teresa Berganza in central roles – and few could be more “central” than Bizet’s Carmen. Made in 1977, the recording followed staged performances directed by Piero Fagioni at the Edinburgh Festival. Berganza had studied the Carmen story, immersed herself in the opera’s background and delivered a characterization that emphasized the gipsy’s nobility, while Abbado’s conducting was both dramatic and vividly coloured.