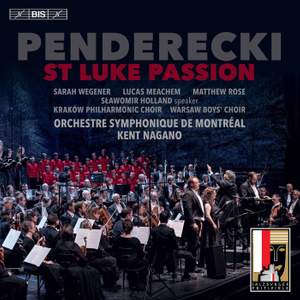 Nagano’s soloists are uniformly excellent and his choral singers exceptional in their unfailing commitment. A definitive recording of a modern masterpiece. — Choir & Organ, September/October 2020, 5 out of 5 stars More…

The American conductor talks to David about his recent recording of the late Krzysztof Penderecki's searing setting of the St Luke Passion with the Orchestre Symphonique de Montréal.

Krzysztof Penderecki's setting of the Passion story as told in the Gospel of St Luke was premièred in 1966 and immediately established a place for itself among the most important large-scale choral works of the twentieth century. Despite its decidedly modernist idiom, the music’s emotional power, glowing colours and sonic impact spoke to audiences as well as critics, one of whom described St Luke's Passion as ‘the most important bridge between the spirit of the liturgy and modern music.’ Strongly influenced by the Passions of J. S. Bach, Penderecki pays homage to the great composer by using the B-A-C-H motif throughout the work, and like Bach he has arranged his Passion in two parts, with monumental choral numbers framing the whole. Penderecki’s score is for large forces including an extended orchestra, three mixed choirs, plus a boys’ choir, speaker and three vocal soloists (soprano, baritone and bass). On 20th July 2018 these all convened at the Felsenreitschule in Salzburg: l'Orchestre symphonique de Montréal with their principal conductor Kent Nagano, the Warsaw Boys’ Choir and Kraków Philharmonic Choir, the three soloists and the actor Sławomir Holland. The occasion was the opening concert of the Salzburg Festival, and in the audience was the composer himself, Krzysztof Penderecki. Present was also a recording team led by Robert Suff, senior producer at BIS, and this disc is the document of this very special occasion.

Nagano’s soloists are uniformly excellent and his choral singers exceptional in their unfailing commitment. A definitive recording of a modern masterpiece.

The score asks that the three choruses be separated spatially, and the SACD tracks here do a better job of differentiating them—and the boys’ choir—than any other I’ve heard. The recording, with terrific bass definition, does sacrifice a certain level of detail for a sense of space and grandeur, but it’s a work that can take it. All in all, a sensational addition to the catalog.