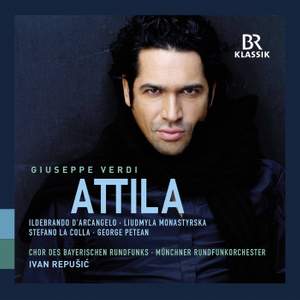 Following Giuseppe Verdi's "Luisa Miller", with which Ivan Repušić made his debut as principal conductor of the Münchner Rundfunkorchester in September 2017, the conductor’s successful cycle of early masterpieces by the famous Italian opera composer now continues with “Attila”. In the recording of the concert performance from the Prinzregententheater, outstanding performers provide authentic fluidity and vocal splendour. This highlight of Munich musical life from the end of last year is now being released on BR-KLASSIK as a double CD. Like its predecessors "Nabucco" and "I Lombardi", Verdi's early masterpiece "Attila" is a choral opera in the best sense, and gained an enthusiastic reception from the Italian unification movement: its themes reflected the aspirations of the Risorgimento in the restless Italy of that time. The concert performance of the opera (in the original Italian) at Munich’s Prinzregententheater received an enthusiastic reception from the critics. “A feast of song” was mentioned several times, and vocal quality and the fine performances by Ildebrando D'Arcangelo and Liudmyla Monastyrska came in for special praise. The Bavarian Radio Chorus, said the critics, clearly conveyed its joy at the theatrical effect of the work, and the dramatic and dramaturgical context was delivered with great success by conductor Ivan Repušić and the Münchner Rundfunkorchester. This "Attila" is genuine theatrical Verdi: vital, powerful, passionate and full of life.

D’Arcangelo’s is a very human Hun, which isn’t a bad thing. He greets his betrayal at the final curtain with shock—how could they do this to such an amiable invader?...This is the third early Verdi opera BR-Klassik has recorded in concert with Repušić, who whips breezily through the score, drawing enthusiastic playing from the Munich Radio Orchestra. The woodwind playing is particularly fine and there’s fire in the brass.