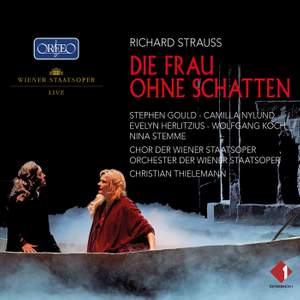 Stemme is focussed and expressive, and if Koch sometimes seems underpowered, that is only through comparison to her. Herlitzius is similarly impressive, and she and Stemme are sufficiently distinct... — Fanfare, September/October 2020 More…

"Not many masterpieces have premiered at the Vienna State Opera. Die Frau ohne Schatten – the fourth collaboration between Richard Strauss and Hugo von Hofmannsthal – make one of the few exceptions.

On the evening of 25 May 2019 – the 150th anniversary of the opening of the Vienna State Opera – a star-studded festival première of Richard Strauss’ Die Frau ohne Schatten took place at Vienna State Opera. Together with his librettist Hugo von Hofmannsthal, Strauss, at the time director of the opera house, developed a fairytale, complex and psychologically discriminating work that received its world première a hundred years ago, on 10 October 1919 at the opera house on the Ring. Since then, Die Frau ohne Schatten has enjoyed a rich performance history and is regarded as a special highlight of Viennese and international music theatre."

Stemme is focussed and expressive, and if Koch sometimes seems underpowered, that is only through comparison to her. Herlitzius is similarly impressive, and she and Stemme are sufficiently distinct in timbre to distinguish them in their many ensembles. Best of all is Camilla Nylund as the Empress.

Nylund is probably today’s reigning Empress, bringing shining tone – more silver than steel – to a role she’s made her own… Stemme is predictably fine as the Dyer’s Wife, too, offering the necessary powerful integrity to counter the character’s less appealing traits… Koch remains an eminently likeable Dyer…The chief glory, however, is undoubtedly the conducting and playing.

Sonically surely the best Die Frau has ever enjoyed...The conductor here is the true hero: Thielemann’s orchestral storytelling negates any vocal deficiencies, making for an engrossing Frau which carves out a very special niche in the opera’s rich recorded history.