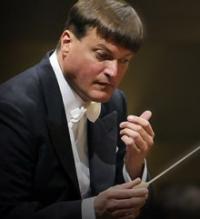 The German conductor Christian Thielemann was born in Berlin in 1959 and began his career as a repetiteur at the Deutsche Oper and an assistant to Herbert von Karajan whilst still in his teens. He spent several decades working at smaller German and major Italian opera-houses before being appointed music director at the Deutsche Oper in 1997, making his debut at the Bayreuth Festival (where he had previously assisted Daniel Barenboim) in 2000; fifteen years later he was announced as the festival’s music-director, and his discography includes Bayreuth productions of Tristan und Isolde, the Ring Cycle, and Der fliegende Holländer. In 2004 he was appointed music director of the Münchner Philharmoniker, with whom he has recorded Strauss Lieder with Renée Fleming and Diana Damrau, Brahms’s Deutsches Requiem, and symphonies by Beethoven, Mahler and Bruckner.

Thielemann is particularly renowned for his interpretations of operas by Strauss and Wagner, and core German orchestral repertoire, including the symphonies of Bruckner and Beethoven; his Beethoven cycle with the Wiener Philharmoniker was described as ‘not only conservative but thought-prokovingly original’ (International record Review), and ‘defiantly old-school’ (The Arts Desk).