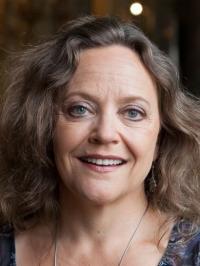 The German soprano Evelyn Herlitzius is widely known for her visceral portrayals of hochdramatische roles such as Turandot, Salome, Elektra, Kundry, The Dyer’s Wife in Die Frau ohne Schatten and Beethoven’s Leonore. Herlitzius was born in Osnabrück in 1963 and trained as a dancer before enrolling as a singer at Hamburg’s Musikhochschule; she spent over a decade as an ensemble member at the Dresdner Semperoper, going on to make her Bayreuth debut as Brünnhilde in 2002 (she subsequently returned to the festival as Kundry, Ortrud and Isolde. Her discography includes the title-role in Elektra for Christian Thielemann, Ortrud on the same conductor’s Lohengrin from the Staatskapelle Dresden (opposite Anna Netrebko and Piotr Beczala), and Isolde on the DVD of Katharina Wagner’s Tristan und Isolde from the 2015 Bayreuth Festival.