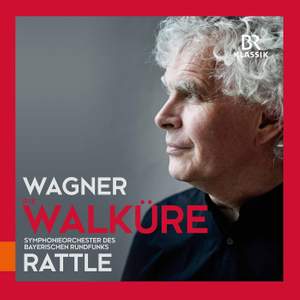 The orchestral playing is predictably excellent—the woodwind solos always have character, and the low brass have an ability to add menace and bite without overpowering the orchestra—but Rattle... — Fanfare, July/August 2020 More…

To follow the release of its November 2015 recording of Richard Wagner's Das Rheingold BR-KLASSIK is now continuing the cycle with The Valkyrie. With his "Rheingold", Sir Simon Rattle has already decisively disproved the longstanding claim that he and Wagner were unsuited to one another. This next collaboration between the Symphonieorchester des Bayerischen Rundfunks and the British conductor not only features a team of first-rate Wagner singers but also reveals once again how well Rattle understands and interprets Wagner's music. Only a few months after the live event recorded in Munich, this mighty music drama – a huge success with the public – is being released for the first time on four very fine CDs.

The orchestral playing is predictably excellent—the woodwind solos always have character, and the low brass have an ability to add menace and bite without overpowering the orchestra—but Rattle seems to play down its role. The best performance in act II is from Elisabeth Kulman as Fricka. Her singing is characterized by a sense of precision and rhythmic vitality, combined with an elegant clarity of tone. She is a commanding presence too, ideal for the role. The sound quality is excellent.

[Rattle] elicits a performance of rare clarity, with crystalline textures maintained even in the knottiest passages...with some moments achieving an almost chamber music-like intimacy and lightness…[Skelton] sings with a characteristic grand, golden tone and sensitivity...Westbroek is a familiar Sieglinde and performs with her customary integrity and commitment, although the voice strikes me as short on lyrical appeal.

The orchestral playing and the pacing of the score are masterly. Act I is the highlight: Stuart Skelton’s heroic Siegmund confirms he has no rivals in this role, and Eric Halfvarson is as black-voiced a Hunding as you could wish for...the Valkryries (half of them Brits) are as good as any.