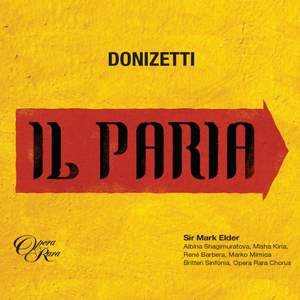 Barbera proves up to the task, effortlessly pinging out top C sharps with abandon. With his generous, pure tone, he is well matched as the love interest of Albina Shagimuratova (Neala), a soprano... — BBC Music Magazine, March 2021, 4 out of 5 stars More…

Recording of the Week,  Donizetti's Il Paria from Opera Rara

Set in 16th-century India, 'Il Paria' is a powerful and moving story of impossible love, social barriers and religious intolerance. Donizetti was particularly proud of his work, reusing many of its melodies in future compositions. Albina Shagimuratova leads a stellar cast including René Barbera, singing one of the most demanding roles ever written for tenor, and the talented Georgian baritone Misha Kiria in the title character.

Barbera proves up to the task, effortlessly pinging out top C sharps with abandon. With his generous, pure tone, he is well matched as the love interest of Albina Shagimuratova (Neala), a soprano with a velvety, often consoling voice and an impeccable sense of line, while Misha Kiria is imposing as Zarete, the eponymous ‘pariah’...The Britten Sinfonia under Mark Elder are on superb form, the recording carefully balanced so individual instrumental lines blaze through the texture.

The music is splendid, well worth discovering...Shagimuratova is superb...Barbera is breathtakingly wonderful...Elder conducts with his customary zeal. Subtlety, too...The Britten Sinfonia respond to Elder’s conducting with playing of great sensitivity and beauty.

Barbera takes Idamore's formidable technical challenges in his stride...Shagimuratova’s ample, silvery tone and gleaming top notes are every bit as thrilling as they were on Opera Rara’s Semiramide, and she’s a fine vocal actress, whilst Kiria brings Zarete to life in all his emotional complexity...The splendid Opera Rara chorus have plenty of opportunity to shine in the Brahmins’ great hymn to the sun in Act Two.

Elder is an experienced Donizettian with a keen instinct for how to shape this music ensuring maximum dramatic thrust but also spotlighting the composer’s felicitous orchestral effects...Shagimuratova proves she’s a lot more than simply a spinner of pretty roulades...Barbera is quite a find as Idamore…Il Paria has a great deal going for it and repays repeated encounters, especially in a top-notch performance like this