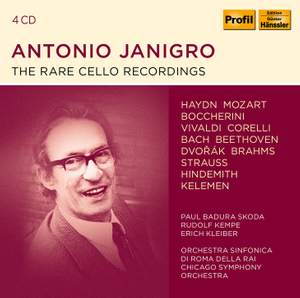 Janigro was a key figure in the musical life of the Balkans. He didn’t have Tortelier’s expressive sound, but was clearly a great energiser – witness the tracks recorded with the Zagreb Soloists,... — BBC Music Magazine, June 2020, More…

Theme. Don Quixote the Knight of the Sorrowful Countenance

Var. 1, The Adventure with the Windmills

Var. 2, The Battle with the Sheep

Var. 3, Dialogue of Knight and Squire

Var. 4, The Adventure with the Penitents

Var. 7, The Ride Through the Air

Var. 8 The Adventure with the Enchanted Boat

Var. 9, The Combat with the Two Magicians

Finale. The Death of Don Quixote

"The Italian conductor and cellist Antonio Janigro (1918-1989) lives on in the memory. As an outstanding cello virtuoso he set benchmarks with his recordings. The 4 CD's of this box set provide a representative cross section of his rare cello recordings.

In 1954 he founded the Zagreb Soloists, which developed over time into one of the

world's best string orchestras. Its reputation grew at such a mercurial pace that the ensemble was given permission, even at the height of the Cold War, to perform on international stages. Janigro was also conductor of the Radio Zagreb Symphony Orchestra (1954-64) and of the Orchestra Dell'Angelicum di Milano. A s successor to Karl Ristenpart he headed the Chamber Orchestra of Saarland Radio.

Antonio Janigro compiled a wide repertoire both as a soloist and with the Zagreb Soloists, encompassing works by Vivaldi, Corelli and Boccherini as well as the great works of the Viennese Classical School by Haydn, Mozart and Beethoven through to Brahms. He simultaneously ensured that works by contemporary composers were welI represented in his concert programmes and as a result premiered some very interesting works by the likes of Krzysztof Penderecki, Gyorgy Ligeti and Milko Kelemen, who was involved in this very collection, both as composer and arranger."

Janigro was a key figure in the musical life of the Balkans. He didn’t have Tortelier’s expressive sound, but was clearly a great energiser – witness the tracks recorded with the Zagreb Soloists, the group he founded and led.