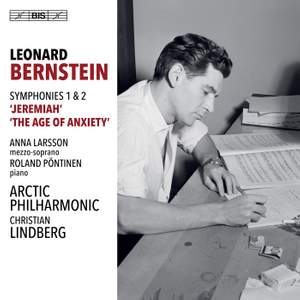 Bernstein’s first two symphonies are high-octane displays of orchestral virtuosity, played here with clarity and strength. I only wish both were played with more vibrancy and freedom: they feel... — BBC Music Magazine, July 2020, More…

At the age of 21, Leonard Bernstein wrote what he described as a Hebrew song using a text from the Lamentations of Jeremiah. Three years later the song became the final movement of his Symphony No.1 and in January 1944 Bernstein himself conducted the première of the work. The first movement aims to parallel in feeling the intensity of the prophets pleas while the scherzo gives a general sense of the destruction and chaos. Being a setting of the biblical text, the third movement is naturally more literary: the cry of Jeremiah, as he mourns his beloved Jerusalem. During the next few years, Bernsteins career as a conductor took flight, while the musical On the Town made his name on Broadway. Towards the end of the 1940s he returned to the symphonic genre, however once more with an extra-musical inspiration. W.H. Audens poem The Age of Anxiety is set during the recently concluded war, and falls like the symphony into six sections during which four characters express their anxieties, hopes and the quest for meaning and identity. Bernstein chose to portray all four characters via a single instrument, the piano. The instrument comes to the fore at various points and in one of the final sections Bernstein supplies what is arguably the most exuberant and rhythmically dazzling display of piano writing in the symphonic literature. For this Christian Lindberg and the Arctic Philharmonic have enlisted the aid of Roland Pöntinen, while Anna Larsson is the soloist in Jeremiah.

Bernstein’s first two symphonies are high-octane displays of orchestral virtuosity, played here with clarity and strength. I only wish both were played with more vibrancy and freedom: they feel a little on the safe side.

Lindberg and his unlikely Arctic Philharmonic really ‘get’ the quietudes in the piece: from the Edward Hopperesque duo of lonely clarinets onwards it is a reading that really probes the inky atmosphere of a nocturnal adventure...and there is a motoric imperative about the performance, from both the brilliant Arctic orchestra and Roland Pöntinen’s fiercely percussive playing...But it is the poetry of Pöntinen’s playing, the inwardness, that stays with one.