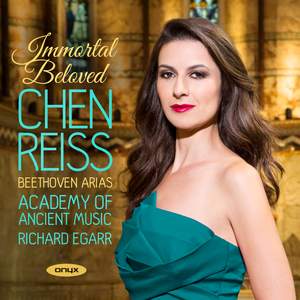 Reiss manages coloratura passages with ease, her tone bright and clear, her voice firm throughout its considerable range and she is always wonderfully in tune…The Academy of Ancient Music gives... — BBC Music Magazine, June 2020, 4 out of 5 stars More…

The Israeli soprano is sparkling and technically fearless in a programme of arias with the Academy of Ancient Music, whilst Goerne's song-recital with Jan Lisiecki is an altogether darker affair.

The Israeli soprano talks to Katherine about her new album on Onyx Classics, Immortal Beloved, which includes music from Fidelio and Egmont as well as some of the composer's earliest vocal works.

Israeli soprano Chen Reiss has rapidly established a reputation as one of the most impressive voices on the operatic stage. She came to prominence as a member of the Bavarian State Opera under the music directorship of Zubin Mehta, and has for a number of years been a resident artist at the Vienna State Opera. Reiss has performed leading parts at the Théâtre des Champs-Élysées, Teatro alla Scala, Semperoper Dresden, Deutsche Oper Berlin, Netherlands Opera, Wiener Festwochen, Maggio Musicale Fiorentino, Opera Company of Philadelphia and the Israeli Opera. She is joined here by Richard Egarr and the Academy of Ancient Music for a recital of Beethoven arias.

Reiss manages coloratura passages with ease, her tone bright and clear, her voice firm throughout its considerable range and she is always wonderfully in tune…The Academy of Ancient Music gives alert support…This disc shines a very welcome light into a dark corner of Beethoven’s output.

[Ah! Perfido] her performance of this piece is the most convincing I have yet heard. Ah! perfido has always seemed to sit rather uncomfortably on the fringes of the Beethoven repertory. Here, it totally convinces. In all of this the Academy of Ancient Music play splendidly, adroitly led by Richard Egarr...this is a very welcome release from a soprano with real character.

These arias abound in colour, inventiveness and – not the first epithet that springs to mind with Beethoven – charm...Reiss uses her bright, even-toned soprano with taste and imagination, spins a true legato line and characterises thoughtfully...she is delightful in Klärchen’s two songs from Egmont...Reiss musters an apt touch of the grand manner in a dramatically intense Ah! Perfido.

'Fliesse, Wonne ihre' is a substantial number, with a long introduction that already showcases alert, finely textured playing from the Academy of Ancient Music under Richard Egarr, who shapes the whole thing with steady glow. The bright, gleaming tone of Reiss’s soprano registers immediately, too, and with rock steady coloratura she bestows an angel’s blessing on the emperor...Reiss’s performance [of 'Primo amore'] is ardent, full of feeling, and indeed she captures the individual qualities of each work and each heroine.

The technical hurdles here are of quite a different order from the stentorian challenges of the Ninth Symphony or Fidelio, and Reiss takes the florid passagework and long, floated high notes entirely in her stride, shaping and colouring text and music expressively so that things never degenerate into mere note-spinning. Her dramatic sensibility gets even more space to shine in the excerpts from stage-works.

The glamorous Israeli soprano presents a selection of arias by the 250th birthday boy. It’s a feat, considering that she wisely omits Beethoven’s most famous soprano solo — Leonore’s big scene from Fidelio — but sings Marzelline’s aria in his only opera with her bright soubrette voice and winning, smiling demeanour.

Reiss led this project, researching and choosing her own arias, and her strong personal connection with her material clearly shows. She possesses an elegant and silvery soprano and is already a greatly successful Susanna and Sophie, but the middle of the voice is growing in warmth and amplitude and without pushing her resources.