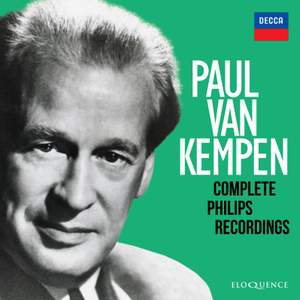 Various of these recordings were previously available as part of Philips’s long-defunct The Early Years series but the current collection is superior in all respects, a masterpiece of careful... — Gramophone Magazine, June 2020 More…

"Ah! Solo per me l'infamia...Piangi fanciulla"

Alongside Willem Mengelberg and Bernard Haitink, Paul van Kempen is one of three Dutch conductors who were regular and esteemed leaders of both the Concertgebouworkest and the Berliner Philharmoniker, live and on record. Van Kempen was an unabashed Romantic in style, in the mould of Mengelberg but with his own approach, and a sensitivity that made him a perfect foil to Wilhelm Kempff and Wolfgang Schneiderhan on Deutsche Grammophon recordings of Beethoven concertos for which he is best remembered. This new box set from Eloquence, however, enables us to reassess Van Kempen as a powerfully individual conductor in his own right. It mixes repertoire classics with music off the beaten track, opera, oratorio, light classics and symphonies, including several recordings receiving their first-ever release on CD. In fact, his discography was surprisingly extensive given his relatively brief career.

Born in 1893, he trained as a violinist and became a member of the Concertgebouworkest under Mengelberg at the age of just seventeen. In the 1930s he conducted orchestras across the Netherlands and Germany, and in 1942 he took over from Herbert von Karajan as music director of the opera house in Aachen. While he made several prewar recordings for Telefunken and DG, however, his career in the studio only took off after 1949, when he took charge of the Netherlands Radio Philharmonic Orchestra, based in Hilversum. The earliest recording here was made in July 1947 78rpms of two Wagner overtures with the La Scala Orchestra of Milan. The remainder of the box dates from the first half of the 1950s Van Kempen died at the age of 62 in 1955 documenting his fruitful relationships with the NRPO, Berlin Philharmonic and Concertgebouw Orchestras , but also with ensembles farther afield: overtures with the Lamoureux Orchestra in Paris and a Verdi Requiem in Rome with the Santa Cecilia Orchestra and an unusual cast of international soloists led by the superb Dutch soprano Gr Brouwenstijn.

Core repertoire includes a trio of Beethoven symphonies made in Berlin (Nos. 3, 7 and 8), spaciously conceived but marked by a driving pulse, as well as the less-familiar Consecration of the House Overture which originally appeared on a DG 10-inch EP curiously paired with Ferdinand Leitner leading Bachs Third Brandenburg Concerto. Brouwenstijn reappears in Italian operatic excerpts made for Philips with the NRPO, but the real Hilversum rarity is the first recording of Isaiah the Prophet, an opulent neo-Romantic oratorio written by Alexander Tansman in 1950 to celebrate the creation of the Jewish state of Israel. Van Kempen had a special feeling for the music of Tchaikovsky, and the Concertgebouw recordings of the last two symphonies can fairly be considered classics of the gramophone, alongside the Romeo and Juliet, 1812 and Capriccio Italien. In all of these, Van Kempens vivid contrasts of tempo and sure dramatic grip were much admired. In a perceptively-written booklet essay, music historian Niek Nelissens extended appreciation of the conductor reveals how he was more respected than liked by orchestras for his autocratic approach, but also how his firm grip on an orchestra was an early inspiration for Haitink. For all admirers of the art of conducting, the box will be an invaluable acquisition. Paul van Kempen is a faded rose in a few collectors memories. By the evidence of this invaluable reissue, however, more of us should be paying attention.

Blistering performances of all three works by Van Kempen and the famous Concertgebouw, who whip up a veritable tempest of sound. At first hearing it's almost overpowering. High Fidelity, March 1954 (Tchaikovsky)

A fine, fiery performance The playing of the orchestra is well up to their high reputation and, apart from a few dry patches, the recording is excellent. Musical Times, January 1955 (Beethoven, Symphony No. 3)

This is, perhaps, the best performance of [Tchaikovskys Fifth] symphony yet to appear on LP. The Concertgebouw Orchestra plays with its customary virtuosity and van Kempen is able to produce a performance of great fire and verve. EMG Monthly Letter, September 1955

Various of these recordings were previously available as part of Philips’s long-defunct The Early Years series but the current collection is superior in all respects, a masterpiece of careful planning, in fact...Beethoven is represented by an Eroica that is truly among the greatest of the period – of any period, I’d say...testimony to a genuinely great conductor who up until now has rarely been acknowledged as such.