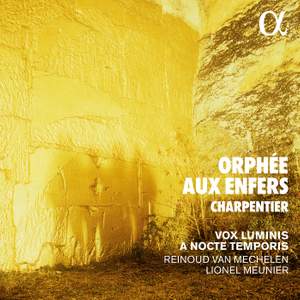 Van Mechelen is a seductive Orpheus – small wonder that his limpid, pliant, expressive voice and eloquent diction enchants both his nymph-bride Eurydice (brought to life here by the dewy-voiced... — BBC Music Magazine, March 2020, 5 out of 5 stars More…

The Belgian tenor talks to David about his recent double-bill of Charpentier's settings of the Orpheus myth, with A Nocte Temporis and Vox Luminis.

The two Belgian early music ensembles pool their resources for two very different works depicting Orpheus's descent to the underworld, with Van Mechelen on outstanding form as the intrepid hero in each case.

The Orpheus myth was as important for the birth of opera in France as it had been in Italy. In 1684, Charpentier composed a work for three voices, Orphée descendant aux Enfers. With this piece, remarkable for its style and concision, he showed how well he had assimilated Carissimi's art. It is a dramatic scene, similar to the sacred histories of the Roman master. The text, by an unknown author, narrates Orpheus quest for his beloved in the Underworld. The hero's haute-contre gives him an elegiac timbre this was the vocal register in which Charpentier, himself a singer, excelled. In 1687 he created his second illustration of the myth, La Descente d Orphée aux Enfers. In its two acts can be discerned the outline of a possible complete opera the manuscript has reached us shorn of the third act in which Orpheus would presumably have lost Eurydice before being devoured by the Maenads. While La Descente d Orphée has already been recorded several times, the Orphée of 1684 is a rarity and a magnificent discovery. In these two roles that might have been written for him, Reinoud van Mechelen is at the peak of his artistry, while his ensemble A Nocte Temporis and Lionel Meunier's group Vox Luminis blend in perfect symbiosis.

Van Mechelen is a seductive Orpheus – small wonder that his limpid, pliant, expressive voice and eloquent diction enchants both his nymph-bride Eurydice (brought to life here by the dewy-voiced Déborah Cachet) and the god Pluto (stylishly sung by Geoffroy Buffière)…The sensitive interplay of voices and instruments has all the intimacy of chamber music…Alpha Classics’s recording is luminous and detailed.

As for the performance, it is uniformly excellent. There is a nice integrated flow between vocalists and orchestra throughout, done in keeping with the seamless style of the opera of the time...Charpentier’s music is uniformly charming and fluid.

The music for the viols is simply ravishing, and it’s beautifully played. Van Mechelen sings powerfully, with more than a touch of desperation. The other instruments of A Nocte Temporis provide excellent support.

Van Mechelen may in some ways be the best of all, his haute-contre being more intrinsically beautiful than the voices of his rivals, his phrasing and ornamentation also being near impeccable...The smaller roles are all more than capably sung, the cast, well used to singing together as Vox Luminis, combining in the choruses to deliver perfect tuning and balance.

[Van Mechelen's] singing of both title-roles is so beguiling and emotionally engaging that it’s entirely understandable that the denizens of the underworld are heartbroken at his departure...It’s the relationship between the musician and the souls in torment (a distinctly more sympathetic bunch than Gluck’s Furies) which lies at the heart of both works, and the humanity with which this is conveyed here makes this a recording to treasure.