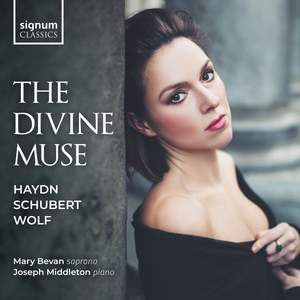 The Italian-language settings respond excellently to Mary Bevan’s silken, untroubled sound. This makes it a recital of two halves. Despite her beautiful voice – and it is truly beautiful: resonant,... — BBC Music Magazine, April 2020, 3 out of 5 stars (Performance) / 4 out of 5 stars (Recording) More…

After the success of their debut disc, ‘Voyages’, Mary Bevan and Joseph Middleton present their second recital disc exploring Lieder in German and Italian by Schubert, Haydn and Wolf. The programme is woven around songs inspired by the ‘muses’ of the day, both mythological and divine.

It begins with Schubert’s dramatic and reverential settings of sacred German poetry, set alongside his lush emotional portrayals of female characters in the Italian settings.

The central section of the disc is then devoted to Haydn’s epic ‘scena’ depicting the famously cruel abandonment of Arianna by her lover Teseo, ‘Arianna a Naxos’. Haydn’s beautiful prayer ‘Geistliches Lied’ takes us back into the world of German poetry and the religious fervour that arose from the collective belief in Christianity which pervaded most art forms of the age.

The disc then moves into works by Hugo Wolf, whose stunning settings of devotional texts take the listener right to the heart of the characters; a few of these songs were in fact inspired by paintings. The early moments of Jesus Christ’s life are vividly portrayed here, particularly in songs such as ‘Die ihr Schwebet’, ‘Auf ein Altes Bild’ and ‘Schlafendes Jesuskind’, while the haunting ‘Gesang Weylas’ invites the listener into the world of the mysterious goddes Weyla who wistfully dreams of the shores of her distant homeland. From Ganymed to Christ, Dido to the Virgin Mary, Arianna to St Peter, this recital disc richly illustrates the lives and events surrounding the ‘divine muses’ who inspired these composers.

The Italian-language settings respond excellently to Mary Bevan’s silken, untroubled sound. This makes it a recital of two halves. Despite her beautiful voice – and it is truly beautiful: resonant, creamy and warm, refined and elegant – Bevan seems to float above the raw, heart-wrenching emotion in the German verses. Joseph Middleton’s assured, sensitive and technicolour playing tells a more insightful story.

Mary Bevan is not just an exceptionally fine soprano. She’s also a superb actress...Those dramatic qualities – and her keen care for diction – shine in her latest album...She is at her best in the sprinkling of Wolf’s Mörike Lieder, including an ecstatic ‘Gebet’...Middleton’s playing is always sensitive, never overwhelming the singer.

A singer with real dramatic power, much loved on the opera stage, Bevan gives heartfelt urgency to Arianna’s final Ah! Che morir vorrei (Ah! How I long to die). She and Middleton have devised an absorbing recital, predominantly of Schubert and Wolf, based on ideas of myth and divinity.