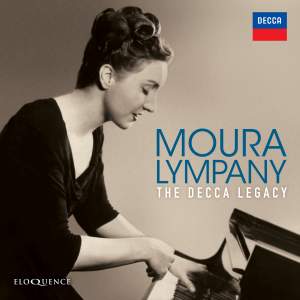 No. 6 Capriccio in F Minor

Rawsthorne, A: Piano Concerto No. 1

The complete Decca recordings of a much-loved English pianist, including previously unissued material, newly remastered and issued with a comprehensive introduction to her early life and recording career. When Moura Lympany first visited Decca’s West Hampstead studios in 1941 to record a pair of Preludes by

Rachmaninov, even the composer himself had committed no more than seven of them to disc, and Eileen Joyce (with Lympany, a fellow pupil of the legendary piano pedagogue Tobias Matthay) had recorded only six. But the ecstatic critical reception to her first recordings – noting the strength of her tone and the subtle play of rubato – enabled her to complete the set within 18 months.

The complete set has been previously reissued by Eloquence, but in this box set of her complete Decca recordings it has been coupled with her remake of the cycle for LP, produced by John Culshaw using Decca’s new ‘ffrr’ technology. In the interim period she had been wooed away from Decca by Walter Legge at HMV, but she returned both to re-record staples of her repertoire and to add works such as Balakirev’s fiendishly difficult Islamey and the Third Concerto of Rachmaninov: both commanding and original accounts. Here also comparisons can be made between her later and her lesser-known early recordings of the Second Concerto by Saint-Saens and the big Romantically styled concerto by Khachaturian which had become a signature work after giving the UK premiere in 1940 .

Also in 1947, Lympany recorded Chopin’s B minor Sonata for Decca, but the results were not released. Now available for the first time, her performance displays an extraordinary insight into one of the great Romantic masterworks, and the subtle sensuality she imparts to the Largo may well be one of the most moving accounts on record. Eloquence has also unearthed a pair of superb live broadcasts: the quirky and lighthearted First Piano Concerto by Alan Rawsthorne (recorded in 1945, with the BBCSO conducted by Sir Adrian Boult), and a landmark work of 20th-century pianism, the Sonata by Samuel Barber, from December 1950. No collector of pianists and great piano recordings will want to be without this comprehensive tribute to Lympany’s art.

The extensive booklet is superbly annotated with a reminiscence by Bryce Morrison and a fascinating note by Stephen Siek, as well as several rare and some previously unseen photographs from the Moura Lympany Archive.

‘Here is the very luxury of piano tone and art in the playing.’ The Times, October 1941 (Rachmaninov Preludes, 1941)

‘Moura Lympany plays, in my view, superbly; she gives us the music with the pianistic conviction of the person who has written it.’ Gramophone, July 1951 (Rachmaninov Preludes, 1947 recording)