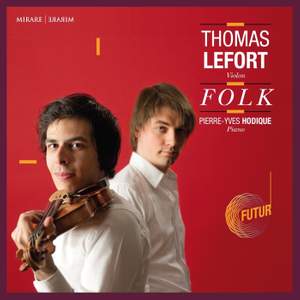 This album is an opportunity to pay tribute to folk music, to the traditional dances and songs that inspire a large part of the violin repertory. Between the end of the Nineteenth Century and the first half of the Twentieth, a number of composers succeeded in transmitting through their music powerful, emotionally charged impressions, resulting from their travels and their encounters with certain musical traditions, traditional melodies, rhythms and specific harmonies.

The violin is the folk instrument par excellence, the instrument of travel and roaming. It is at once universal, popular and nomadic and does not hesitate here to perform the way an actor would, expressing different human emotions in turn.