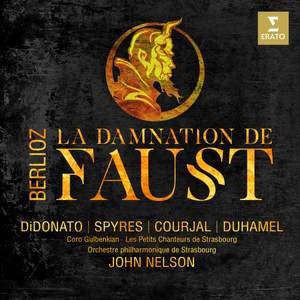 Nelson has a great feel for the weird structure of the piece, with its sudden lurches of pace and location...Nelson’s pacing is uncannily ‘right’; he’s not one to force Berlioz, period-style,... — Gramophone Magazine, December 2019 More…

“The most dramatic piece that Berlioz ever wrote,” is how conductor John Nelson describes La Damnation de Faust. The composer designated this thrilling hybrid of oratorio and opera a ‘légende dramatique’. Following in the triumphant footsteps of Les Troyens, also recorded at the Auditorium Erasme in Strasbourg, this performance reunites Nelson and the Orchestre Philharmonique de Strasbourg with singers Michael Spyres, Joyce DiDonato and Nicolas Courjal.

“The most dramatic piece that Berlioz ever wrote,” is how conductor John Nelson describes La Damnation de Faust. Based on Goethe’s Faust and first performed in 1846, it is an epic hybrid of oratorio and opera – a ‘légende dramatique’ according to the composer, who recognised that its greatest potential lay in firing the audience’s imagination: “Music has great wings,” he said, “but the walls of a theatre do not allow it to spread them to the full.”

This recording was made in the Auditorium Erasme in Strasbourg in April 2019, two years after Nelson, the Orchestre Philharmonique de Strasbourg and a superb cast including Joyce DiDonato, Michael Spyres and Nicolas Courjal brought Berlioz’s Les Troyens to life in the same venue. The associated Erato recording of the huge two-part opera has gone on to win unalloyed praise and multiple major prizes. As the New York Times wrote: “Berlioz’s epic opera has rarely been given such luxury treatment as in this magnificent live recording from France.”

The Times, also giving a five-star review to the performance, said: “Strasbourg is a kind of meeting point between France and Germany — and in a way so is Damnation, in which the extravagance of Berlioz’s writing meets the philosophical rigour of Goethe. The conductor favours this orchestra, too, for its Gallic colours and Germanic discipline. It makes an impressive blend. The Hungarian March, kicked off by Nelson with deceptive calm, built up to a strutting, testosterone-fuelled climax. Amid the great setpieces, however, one admired the sinuous delicacy of the OPS’s playing: the gauzy strings accompanying the devil’s serenade, ‘Voici des roses’, the eerie woodwind tinkle of the infernal spirits, and the two instrumental partners in Marguerite’s big arias, first a silky viola, then a luminous cor anglais ... Vivid characters massed behind the orchestra — the Coro Gulbenkian, a virtuosic Portuguese choir who played impeccable Easter celebrants, lusty peasants and outrageously raucous students, but saved the best for worst as the cacophonous imps of Hell. Their richly detailed performances set the tone for the soloists. Nicolas Courjal’s Méphistophélès … took wicked ownership of the text, playing Faust like a fish on a line. This is a devil who would happily pour the champagne at the same time as impaling your nether regions with a pitchfork. He made a compelling foil for Spyres’s ardent, doomed and near unsurpassable Faust. He’s a fearless tenor who can do baritonal strength as well as spinetinglingly floated high notes, and who — by the end of the night — seemed utterly under the spell of Mephisto and Berlioz ... DiDonato [was] a Marguerite of marvellous elegance and vulnerability, close to delirium in her last scene, an emotion the whole audience could partake in when it was all over.”

The central role of Faust is closely identified with Michael Spyres. Le Monde pointed out that the character had resonances for Berlioz himself: “An alter ego condemned to solitude, a spirit too large for a small world … the archetypal Romantic hero.” The online magazine Toute la culture observed that the tenor “took such a grip on Faust’s character that he became indistinguishable from … the man who has sold his soul to the devil, a timeless poetic and romantic character … He [Spyres] was possessed, not by Méphistophélès, but by the music … When everything came to an end, there was an almost religious silence … before thunderous applause broke out. Amidst the acclaim Michael Spyres wiped tears from his eyes … What a musical experience this had been for us all!”

Nelson has a great feel for the weird structure of the piece, with its sudden lurches of pace and location...Nelson’s pacing is uncannily ‘right’; he’s not one to force Berlioz, period-style, but he’s no slouch either. He tempers excitement with grandeur...Spyres’s golden tenor is so well suited to Berlioz...this new version is a very serious competitor in the Faust stakes.

The Strasbourg orchestra displays true idiomatic expressiveness in matching solo instrumental voices to those of the soloists. Preparation was clearly painstaking...Spyres supplies, in my view, the first recorded Faust since Nicolai Gedda to bring the character completely to life...DiDonato’s Marguerite, exquisite in frailty and vulnerability, comes across likewise in three dimensions.

Nelson’s obvious affection for this music is evident from the off in an account which stresses the tenderness and the inner details of the score even in potentially bombastic passages...Spyres is completely inside the character as well as entirely on top of Berlioz’s often excruciatingly demanding writing...Courjal resists the temptation to play to the gallery and instead emphasises Méphistophélès’s chilling plausibility...For me this is the crowning glory of this Berlioz anniversary year - Nelson and Co. should clear some space on the mantelpiece now.

The cast pits Michael Spyres’s striving, romantic Faust against the delectable Marguerite of Joyce DiDonato, who, with her velvet-plush timbre and musical insights, makes something special of her two solos and the love duet...the orchestra and chorus excel in the Marche hongroise, the Menuet des feux follets and a gripping Course à l’abîme.

Nelson is once again brilliantly on Berlioz’s wavelength...Throughout, the performance captures the way the work balances on the cusp of high Romanticism. Nothing is messy, nothing overdone, but details pop out everywhere…[Spyres] dispatches the long and difficult title role with almost superhuman ease, the notes dripping like honey. You’re unlikely to hear this role sung better.

Wherever your ears land — on the soloists, the sleekly colourful Orchestre Philharmonique de Strasbourg or the versatile Coro Gulbenkian — there’s music-making of such pounding energy that you’re swept along almost like Faust, hurtling with him into Hell’s abyss. Nelson plays his own vital part shaping dynamics, highlighting contrasts and balancing the bumptious with the tender. Handled carelessly, Damnation can turn into a parade of highlights and little more; Nelson fuses them into a whole.

After setting a new standard in “Les Troyens” two years ago, Mr. Nelson is back with another immaculate account of a Berlioz masterwork.