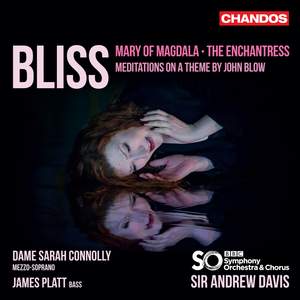 Bliss: Mary of Magdala, The Enchantress & Meditations of a Theme by John Blow

There is an immolatory vehemence to her [connolly’s] performance, securely buttressed by Davis and his BBC forces...Bliss adherents will need to add this to their roster of necessary discs. — MusicWeb International, January 2020 More…

No. 1, Bring Me the Laurel Leaves

Bliss: Meditations on a Theme by John Blow

Introduction. The Lord Is My Shepherd

No.1, He Leadeth Me Beside the Still Waters

No. 2, Thy Rod and Staff They Comfort Me

No. 4, He Restoreth My Soul

No. 5, In Green Pastures

Interlude. Through the Valley of the Shadow of Death

Finale. In the House of the Lord

I. Ashen the Sky

II. At Last, at Last

IV. Why Trouble Ye Her?

VI. Surely This Was the Place

VII. But What Are Those Two Strangers

VIII. But Who Is That Yonder

Bliss composed The Enchantress in 1951, the year of his sixtieth birthday, for Kathleen Ferrier. The text is a free adaptation of the Second Idyll of Theocritus, made by Henry Reed, and well suited to Bliss’s love of classical Greek authors. Meditations on a Theme by John Blow, from 1955, was written for the CBSO, the first in a number of commissions from the John Feeney Trust. Described as a sacred cantata, Mary of Magdala was Bliss’s second Feeney Trust commission, composed during 1962 and 1963. For a libretto, Bliss turned to Christopher Hassall, his collaborator on three previous works, including The Beatitudes. The BBC Symphony Orchestra and Chorus give of their best under their former chief conductor Sir Andrew Davis, and the contributions from the soloists, Dame Sarah Connolly and James Platt, are outstanding. Recorded in Surround Sound.

There is an immolatory vehemence to her [connolly’s] performance, securely buttressed by Davis and his BBC forces...Bliss adherents will need to add this to their roster of necessary discs.

Connolly brings Simaetha to life with the combination of blazing sensuality and vengeful vehemence that have won her such acclaim as Charpentier’s Medea, Handel’s Agrippina and Britten’s Phaedra...But it’s the final piece here that's the real revelation, depicting Mary’s encounter with the newly-risen Christ with an immediacy and tenderness that never tips over into sentimentality.