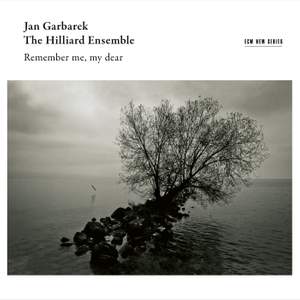 Remember Me, My Dear

Garbarek: We Are the Stars

Brumel, A: Agnus Dei (Arr. Garbarek and The Hilliard Ensemble)

anon.: Remember Me, My Dear (Arr. Garbarek and The Hilliard Ensemble)

Recording of the Week,  Jan Garbarek and The Hilliard Ensemble

Released 25 years after Officium, Remember Me, My Dear is the final album recorded by saxophonist Jan Garbarek and The Hilliard Ensemble.

25 years on from the release of Officium, the groundbreaking alliance of Jan Garbarek and The Hilliard Ensemble, comes Remember me, my dear, recorded during the final tour the group made in October 2014.

Named for the Scottish ballad which concludes it, the programme is emblematic of the range of repertoire the Norwegian saxophonist and British vocal quartet explored together from Pérotin, Hildegard von Bingen, Guillaume le Rouge, Antoine Brumel to Komitas, Arvo Pärt and more.

It could be said that the Hilliard/Garbarek combination, in concert, transcended its source materials, with early music, contemporary composition and improvisation interfused in the responsive acoustics of sacred spaces. And this final album reminds us that this unique grouping, and its unprecedented exploration of sound, was consistently breathtaking.

They were first brought together by producer Manfred Eicher in 1993. Officium, the debut album made the following year, touched a large international audience. A million copies of Officium were sold swiftly, and a thousand concerts, many in cathedrals, churches and other sacred spaces, followed over a 20-year period.

The wide-ranging programme follows their established recipe of early, contemporary and improvised music, recorded to achieve heightened resonance...The title song – anonymous Scottish 16th century – is a heartfelt finale. Not for purists, but offering its own singular and hard-won purity.