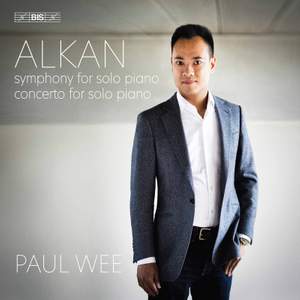 Wee is a sensation; there’s no other word to describe his jaw-dropping playing. This is the Australian pianist’s debut album, and it’s a blockbuster. All of this is captured in the most spectacular... — Fanfare, January/February 2020 More…

Australian pianist and lawyer Paul Wee talks to David about his new recording of two monumental works by Alkan - the Symphony and Concerto for solo piano - and about his intense double career.

Charles-Valentin Alkan made his name as pianist in nineteenth-century Paris and seemed poised for a glittering career. But following a series of setbacks he withdrew into a life of relative seclusion, and as he receded from the public eye, so too did his music. It was never entirely forgotten, but it was not until the 1960s and 1970s that Alkan’s works began to emerge from obscurity. To quote the liner notes by Paul Wee, ‘Alkan’s music exhibits a formidable grasp of form and structure, a strong command of melody, a high sense of drama and an unprecedented exploitation of the capabilities of the piano.’ Combined here on one disc – possibly for the first time – are the Symphony and the Concerto for Solo Piano, two pinnacles of Alkan’s legacy. Unusually, the four movements of the Symphony and the three movements of the Concerto are included as seven études within Alkan’s Douze Études dans tous les tons mineurs (Twelve studies in all the minor keys), in 1857 as his Op. 39. As to why Alkan composed these epic works and then hid them away in a set of études, Wee suggests that they are to be seen as ‘a celebration of the piano and its capabilities.’

Paul Wee is a barrister specialising in commercial law and appears regularly before courts and tribunals on behalf of clients including governments, corporations, financial institutions and individuals. Born in Australia, he began his piano studies at the age of four, continuing them in New York City at the Manhattan School of Music. Going on to study law at the University of Oxford, he attempts to balance his love for the piano alongside the demands of a busy international career in law.

Wee is a sensation; there’s no other word to describe his jaw-dropping playing. This is the Australian pianist’s debut album, and it’s a blockbuster. All of this is captured in the most spectacular and vivid sound by BIS’s full-dimensional SACD recording. An exceptional release, urgently recommended to everyone.

What is almost incredible is that the soloist Paul Wee is not a professional pianist but a highly successful international commercial London lawyer. The precision of his attack, the clarity of the part-playing, the linear focus and structural grasp of each movement of the Symphony are quite thrilling to experience...The spontaneity and drive of his playing smash the sterile confines of the studio.

a stunning performance all round...This is an utterly mind-boggling performance in every respect and a fitting conclusion to a marvellous performance of this complex and extremely taxing work... I have no hesitation whatsoever recommending this disc to anyone who enjoys superb pianism