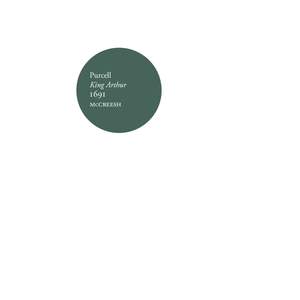 Choruses are more vibrant, dance rhythms more percussive and solos more delicate than in any previous recording. Above all, McCreesh and his artists make us hear Purcell’s genius for word-setting…But... — BBC Music Magazine, December 2019, 5 out of 5 stars More…

Verse & Chorus – Woden, First to Thee / We Have Sacrific’d (Chorus)

Song & Chorus – I Call You All to Woden’s Hall (Chorus)

Prelude & Verse – What Ho, Thou Genius of This Isle! (Cupid)

Verse – No Part of My Dominion Shall Be Waste (Cupid)

Chorus – ’Tis Love That Has Warm’d Us (Chorus)

Song – Two Daughters of This Aged Stream Are We (Two Sirens)

Passacaglia – How Happy the Lover / For Love Every Creature (Chorus)

Tune for Trumpets (after Dioclesian, Z. 627)

Recording of the Week,  Purcell's King Arthur from Gabrieli and Paul McCreesh

Paul McCreesh and Gabrieli give a sparkling performance of Purcell's patriotic extravaganza, from a new edition prepared by Christopher Suckling.

The great patriotic opera of the 17th century, recorded here in a lively new performing edition after two decades in the Gabrieli’s touring repertoire. Notoriously difficult to present on disc or in concert, this version presented by Gabrieli was created to allow an obvious musical narrative, despite Purcell’s music often being completely dislocated from much of the original theatre context.

Gabrieli have been performing the music from King Arthur for nearly a quarter of a century, evolving their interpretation over time. With the score having to be pieced together using separate versions (due to Purcell’s originals being lost), and with Gabrieli’s evolved interpretation of the music, the end product of this recording is truly unique. Their next release on Signum will be with the semi-opera by Purcell, Fairy Queen, in April next year, which is an adaptation of A Midsummer Nights Dream.

Choruses are more vibrant, dance rhythms more percussive and solos more delicate than in any previous recording. Above all, McCreesh and his artists make us hear Purcell’s genius for word-setting…But the chief delight of this recording is its consort aesthetic: rather than elbowing forward through virtuosity, the artists exert themselves to work as a collective…another jewel in McCreesh’s crown.

The eight soloists with two additional singers form an excellent chorus that is adept in every context...Throughout the opera McCreesh’s speeds are relaxed rather than driven – no bad thing, to my mind, and it results in Dryden’s wonderful poetry being acted with personable clarity, and the lucidity of musical gestures ensures that affection and intimacy are the hallmarks of a performance that conveys a humane smile.

[McCreesh] gives us a performance benefitting from years of living with and thinking about the work, constantly evolving his approach to it. The result tempts only superlatives, for the new recording is as accomplished and richly satisfying an experience as anyone could hope for… There is to my mind not the slightest doubt that this truly accomplished achievement is destined to become the reference recording for what is one of Purcell’s finest works.

McCreesh’s Purcell is always worth waiting for. This patriotic 1691 semi-opera...is new to his discography, but is sung and played with his characteristic love of lean textures and youthful voices.

...new string articulation, coarser reeds for wind instruments and natural trumpets mean that the music has a vivid and lively personality. The ensemble of singers is excellent, and it’s good to hear fresh young soprano Rowan Pierce consolidating her growing career.