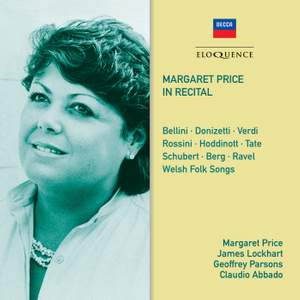 In these song recitals she is undoubtedly musical and accomplished, but the balance leans more toward beautiful vocalizing than interpretation. In the Schubert group there is a perfectly sustained... — Fanfare, January/February 2020 More…

No. 3 Über die Grenzen des All

Verdi: Songs for Voice and Piano / Seste Romanze I

Verdi: Songs for Voice and Piano / Seste Romanze I

A song recital new to CD from a peerless lyric soprano, coupled with classic recordings of Ravel and Verdi.

In 1971 Andrew Porter wrote that Margaret Price's voice was among the things that make one 'glad to be alive'. In the 1960s she had recorded for a small Welsh label a recital of Welsh, German and Italian songs that would become signature items for her over the coming decades. Reissued in 1969 by L'Oiseau-Lyre, the album makes it to CD for the first time in this compilation. In favourites such as Schubert's Heidenröslein, Verdi's Ave maria and five Welsh folksongs, Price is on sovereign form, with a gleaming upper register and engagingly fresh phrasing.

Also from the early 70s is a rare foray into contemporary music inspired by her Welsh heritage, with Alun Hoddinott?s setting of a text by Emyr Humphries, Roman Dream. She recorded this for Argo along with a set of Gaelic folksongs by Phyllis Tate; these, too, are transferred to CD for the first time.

More familiar delights are offered on CD2, with Deutsche Grammophon capturing her voice in full and glorious maturity in a 1987 album of Verdi songs and a recording of Ravel's opulent, oriental song-cycle Shéhérezade, in which she is sensitively partnered by the London Symphony Orchestra under a long-time musical partner, Claudio Abbado; together in 1971 they had recorded the Altenberg-Lieder of Berg which fill out CD1. Thus Price sings in five languages through the course of the compilation, and shows herself a gifted word-painter in each of them: it's a comprehensive tribute to the art of a soprano esteemed by Sir Georg Solti as 'a musician's singer and a conductor's singer'.

'The attraction is the voice, warm, with a mezzo quality still evident, beautifully even in texture, nobly full-bodied on high, generous in phrasing.? Gramophone, April 1976 (L'Oiseau-Lyre recital)

In these song recitals she is undoubtedly musical and accomplished, but the balance leans more toward beautiful vocalizing than interpretation. In the Schubert group there is a perfectly sustained line in “Du bist die Ruh” that any singer would envy.