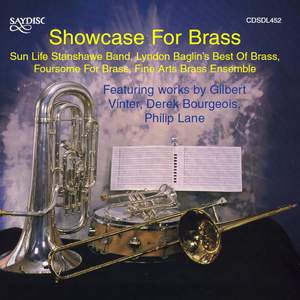 Vinter: Variations On a Ninth

trad.: When The Boat Comes In

The Sun Life Stanshawe Band—originally called The Stanshawe (Bristol) Band— was formed in 1968 and progressed to become one of the finest bands in the U.K. Foursome For Brass — Quartette playing is a popular feature of the Brass Band movement and many combinations of instruments are used. The combination presented here—two cornets, tenor horn and euphonium—is the classic one and is the brass band equivalent of the string quartet. Our 'Foursome for Brass' is composed of players of great experience and it is interesting to note that three of the instrumentalists—Derek Garside, Haydn Harris and Lyndon Baglin—were members of the C.W.S. (Manchester) Band quartette party which won the title of Champion Quartette of Great Britain 1961 under the conductorship of Alex Mortimer. Best Of Brass — Formed in 1982, the Group comprises nine brass instrumentalists and one percussionist drawn from South Wales and the West of England. The group’s aim is to take brass playing to audiences which would perhaps not normally listen to a brass band and at the same time offer the traditional brass band audience something to supplement brass bands. Fine Arts Brass of England has an international reputation as one of the world's leading brass ensembles. Since its formation in 1980 the group was acclaimed by critics and audiences alike for its musical artistry and entertainment. The original release of this album coincided with the Group's 10th anniversary. During that time it had given over 1000 concerts in Britain, toured in over 35 countries spanning four continents and broadcast over 100 times for the BBC alone.