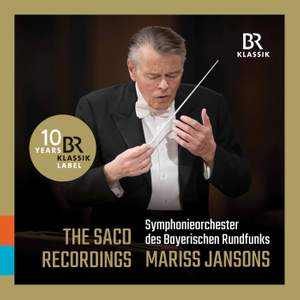 For all fans of truly great audio recording, this new 10-SACD box set, released to mark the tenth anniversary of the BR-KLASSIK label which was founded in 2009, offers musical highlights from the rich symphonic repertoire of Mariss Jansons and the Symphonieorchester des Bayerischen Rundfunks. The box also provides magnificent interpretations of masterpieces, ranging from the First Viennese School and Austro-German Late Romanticism to the music of the 20th century – all of it at the very highest artistic level and in outstanding SACD quality. (Most of the recordings have been published before on CD, but not all of them on SACD.) The box contains Joseph Haydn’s Symphonies Hob. Ia:7 and Hob. I:88 as well as the famous "Harmoniemesse"; Ludwig van Beethoven's Symphony No. 9, Johannes Brahms' Symphonies Nos. 2 and 3, Anton Bruckner's Symphonies Nos. 7 and 8, Gustav Mahler's Symphonies Nos. 5, 7 and 9, as well as Peter I. Tchaikovsky's Fantasy "Francesca da Rimini" and his Symphony No. 5 – each of them in complete recordings. The SACD box set is rounded off by a SACD new released recording of Dmitri Shostakovich's Seventh "Leningrad" Symphony. Numerous renowned vocal soloists as well as the outstanding Bavarian Radio Chorus all perform under Jansons' direction together with the Symphonieorchester des Bayerischen Rundfunks. The box is a must for anyone who wants to gain an impression of the work of the Symphonieorchester des Bayerischen Rundfunks under the direction of its chief conductor Mariss Jansons – and for anyone who wants to gain an overview of the long-standing cooperation between this world-class conductor and the ensembles of the Bayerischer Rundfunk. All in all, this is a more than solid selection of outstanding recordings of oratorio and symphonic masterpieces from the Classical and Romantic repertoire.