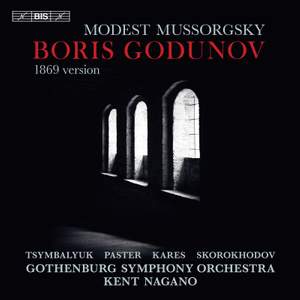 ...this performance is excellent, beautifully sung and cogently paced. The cast is mostly Russophone, which ensures mostly accurate pronunciation...this version is in any case indispensable in... — Fanfare, May/June 2020 More…

Modest Mussorgsky’s Boris Godunov stands out among the major works of the opera repertoire in having an extremely complex creative history. The original libretto, by the composer himself, was based closely on Pushkin’s Shakespeare-inspired drama about the ill-fated Russian ruler. Mussorgsky completed the score in 1869, and submitted it to the committees of the Imperial Theatres. It was rejected, however, primarily because of the lack of a female lead and therefore a love interest, but Mussorgsky’s unadorned style has also been mentioned as a reason. In 1871 the composer therefore reworked the opera extensively, adding new scenes – and a female principal in the form of the Polish princess Marina Mniszek – and changing the overall structure from seven scenes into a prologue and four acts. The revised Boris was completed in 1872, and two years later it was finally performed in St Petersburg, while the Moscow audience had to wait until 1888, seven years after the death of its composer. In order to promote the work, Mussorgsky’s colleague and friend Rimsky-Korsakov undertook to revise the work, making the orchestration more traditional and colorful and softening a number of harsh harmonies. It was the Rimsky-Korsakov version that took the opera out of Russia and without it, the opera would not be as widely known as it is today. In recent times, however, several opera houses have begun performing the more abrasive original version from 1869, and it is this ‘Ur-Boris’ that has been recorded here. It is performed by the Gothenburg Symphony Orchestra under its principal guest conductor, Kent Nagano. They are joined by a cast of mainly Russian vocal soloists, headed by Alexander Tsymbalyuk as Boris, a role he performed under Nagano already in 2013 at the Bayerische Staatsoper. In the opera, as in Pushkin’s drama, the Russian people plays a hugely important role – here performed by the Göteborg Opera Chorus.

...this performance is excellent, beautifully sung and cogently paced. The cast is mostly Russophone, which ensures mostly accurate pronunciation...this version is in any case indispensable in order to hear some of the compelling music that was discarded in the revision.

Nagano keeps Mussorgsky’s musical argument taut and the playing of the Gothenburg SO is very fine, even if he irons out some of the score’s crumpled earthiness...Nagano has gathered together an excellent, largely Russian cast, led by Alexander Tsymbalyuk’s Boris, his softgrained, beautiful bass sounding youthful if under-characterised...But Tsymbalyuk is moving and sincere.

This new account, based on live performances, is beautifully sung and played, and recorded in surround sound.

[Nagano] allows you to hear the score clearly, though scarcely its inherent drama… Tsymbalyuk’s young-sounding Tsar is beautifully sung, gaining in intensity from the scene in the Kremlin onwards; but the developing extremity of his emotional responses is never overdone and his death scene remains restrained, with no scenery-chewing.

More wonderful conducting from Kent Nagano in Boris Godunov... He is precise and often swift, leading to a far more translucent sound than usual, particularly in the choral work, which is exemplary in its rhythmic attack.