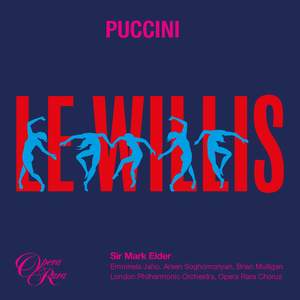 Even at the age of 25 [Puccini] was already a composer of considerable skill, able to come up with musical ideas of exceptional quality. As the abandoned Anna, Ermonela Jaho is right inside the... — BBC Music Magazine, December 2019, 5 out of 5 stars More…

The Albanian soprano talks to Katherine about singing the role of Anna on Sir Mark Elder's recording of Puccini's first opera in its original one-act incarnation, released tomorrow on Opera Rara.

Opera Rara’s recording of Le Willis gives listeners the chance to hear Puccini’s first opera as it has not been heard for more than 120 years. Making use of the new Ricordi edition, Sir Mark Elder conducts a star cast that brings the acclaimed soprano Ermonela Jaho back for her second recording with Opera Rara and introduces the thrilling Armenian tenor Arsen Soghomonyan. This recording includes the two celebrated arias that were added to the revised two-act version of Le Villi and showcases the young and prodigiously talented composer in his first exploration of operatic drama.

“The cast was exceptional. Ermonela Jaho is justifiably famous for her Puccini interpretations and superb vocalism. […] Arsen Soghomonyan’s Roberto was equally assured. He has a lovely covered quality in his tone, is thrillingly secured above the stave, and he colours and phrases most musically and effectively. As Guglielmo, Brian Mulligan sang with resonance and bite in a role that tests the singer at both ends of a very wise range”.

“Elder is a dab hand at this genre of Italian opera and got splendid playing and singing from the LPO and the OR chorus.”

“The performance by the LPO was energized with nuances of dynamics and colour carefully etched in the witches’ dance music and the ardent love music […] Soghomonyan, formerly a baritone, boasts a velvety, ardent tone and sang the role with considerable sensitivity: he is surely a name to watch out for.”

“Puccini’s writing when all three characters sing together is particularly skilful, and here was brought to the full by Brian Mulligan’s strong and assertive baritone as Guglielmo, Arsen Soghomonyan’s dark but exceptionally versatile tenor as Roberto, and Ermonela Jaho’s highly committed and emotional performance as Anna.”

“Opera Rara’s splendid concert allowed us to hear this novelty in its original form for the first time in 134 years, and it proved a winner. […] [Ermonela Jaho] gave her all, drawing on vocal reserves belied by her ballerina figure. Arsen Soghomonyan revealed a warm, mellifluous tenor as the faithless”

Opera Rara’s recording of Puccini’s Le Willis is based on the new Ricordi critical edition, reconstructed by musicologist Martin Deasy. The original one-act version of Puccini’s first opera was successfully premièred at Milan’s Teatro Dal Verme but was never published and has not been heard since 1884. This marks Opera Rara’s first venture into the musical world of Puccini and its second verismo project.

Based on the short story Les Willis by French novelist Jean-Baptiste Alphonse Karr – based in turn on the legend of the Vila who appear in the ballet Giselle – Le Willis was composed for a competition in 1883. While Puccini’s work did not even earn an honourable mention, his supporters helped fund its first production the following year in Milan. This, in turn, won the 24-year-old composer – already hailed as Verdi’s successor – a contract with Italy’s leading publisher, Ricordi. At Ricordi’s request, Puccini set about revising the work, creating a two-act version with additional arias for the soprano and tenor; and this is the form in which the work has been performed ever since.

Returning for her second collaboration with Opera Rara, Ermonela Jaho – the star of the company’s revival of Leoncavallo’s Zazà in 2015 – sings the role of Anna. Armenian tenor Arsen Soghomonyan will make his UK debut as her lover Roberto and Brian Mulligan sings the role of her father Guglielmo. Opera Rara’s Artistic Director Sir Mark Elder conducts the London Philharmonic Orchestra, marking the Orchestra’s sixteenth collaboration with the company following Rossini’s Aureliano in Palmira and Bellini’s Il pirata.

Even at the age of 25 [Puccini] was already a composer of considerable skill, able to come up with musical ideas of exceptional quality. As the abandoned Anna, Ermonela Jaho is right inside the role dramatically. Armenian tenor Arsen Soghomonyan gives an intelligent and idiomatic interpretation, delivered in generous, exciting tone…The chorus and orchestra are both impressive, while conductor Mark Elder delivers a lively and loving account of the score.

Ermonela Jaho, as usual, throws herself into the role of Anna, always expressive over a wide dynamic range. Arsen Soghomonyan’s tenor shows no trace of his baritone origins in his aria of desperation when Anna tries to drag him into the Willi’s realm. Brian Mulligan may be a shade light of voice as Guglielmo, but the high tessitura is smoothly negotiated. Mark Elder allows us to hear the work without a 20th-century filter, so that the opening scenes are played “straight,” the Puccini with whom we are familiar emerging only in the prayer that ends the first scene.

The conductor’s vigour carries through the whole recording, making the most of this edition’s concision, and Elder powerfully shapes the two climaxes…Soghomonyan has an oaky, baritonal tenor, forceful and impassioned, but too similar in colour to actual baritone Brian Mulligan’s sympathetic Guglielmo.

Jaho shines with her unique combination of transparent fragility in the middle register and strength of passaggio which has made of her one of the best Puccinian singers of today. Brian Mulligan sings with a warm baritone, and Arsen Soghomonyan projects an impressive density at the core of his rich spinto—almost Wagnerian—tenor...Le Willis is more than a historical curiosity: not to hear it would mean missing out on some of Puccini’s best music.

Elder (not someone I’ve previously associated with Italian opera) plays up the young composer’s infatuation with Wagner in the orchestral passages, and Ermonela Jaho charts the heroine’s swift journey from ingénue to avenging fury with absolute conviction. Arsen Soghomonyan (who sang as a baritone until two years ago) is still audibly settling into the higher tessitura, but is definitely one to watch.

Elder’s energised conducting packs a powerful punch...The singers are splendid: Ermonela Jaho is touchingly human as Anna, terrible in her spectral revenge; Arsen Soghomonyan, a burly tenore di forza, is a thrilling, visceral Roberto; and Brian Mulligan hurls out his maledictions as Guglielmo when Roberto collapses.

Unlikely to be staged, this is the ideal way to explore Puccini’s youthful gift for lyricism and melody and to hear how, even in his early 20s, despite the static drama, he could shape a duet into a heartfelt emotional episode.

The musical language in its lyrical phrasings, harmonies and emotional warmth is already very much Puccini’s...Elder secures passionately mellifluous playing from the London Philharmonic OrchestraYet the most glorious feature of the show is the Armenian tenor Arsen Soghomonyan…[who] beefs up his numbers with distinctively dark colours and considerable force.

Mark Elder’s conducting brings out the lush harmonies and rhythmic vitality of the score, which to me still sounds more like Mascagni than Puccini, who hadn’t quite yet found his particular voice. A radiant Ermonela Jaho brings her soft- grained yet tensile soprano to bear upon the role of Anna, the girl who is abandoned and turns into a Willi, or spirit, and forces her cad of an ex to dance himself to death.