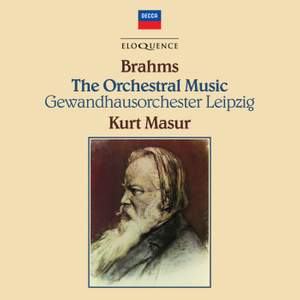 With the exception of the Violin Concerto, all of the performances are captured in beautiful, natural sound (no evidence of early digital era harshness in the Hungarian Dances) that showcases... — Fanfare, January/February 2020 More…

Hardly less than with its founder, Felix Mendelssohn, the Leipzig Gewandhaus grew up with Brahms conducting and playing. For a sense of heritage, the orchestra boasts a Brahms tradition second to none. In the words of Kurt Masur, their Kapellmeister for over a quarter of a century, ‘if they play Brahms, you can say it’s still authentic’. Eloquence has compiled the Brahms recordings they made together between 1973 and 1981 for both the East-German Eterna label and Philips.

Together they form the most comprehensive documentation yet issued of a musical relationship between composer, conductor and ensemble that was uniformly distinguished by deep understanding and affection. From the keyboard lion’s roaring of the First Piano Concerto to the rage and reconciliation of the Third Symphony and the mellow reflections of the Double Concerto, Masur and the Leipzigers present Brahms in the round.

The bedrock of that sound is a strong, unified string section with a density of timbre that supplies all the required weight for the post-Beethovenian drama of the First and Fourth symphonies. Masur maintained a narrow, brightly illuminated palette of wind tone-colours that lends a ruddy glow to the more pastoral tones of the Second as well as the rustic orchestrations of the Hungarian Dances and the oboe-led slow movement of the Violin Concerto. The 1978 recording of the concerto finds its soloist Salvatore Accardo on his most honeyed and alluring form, contrastingly partnered in the Double Concerto by the gruffer, more outspoken tones of the cellist Heinrich Schiff. Masur and the Gewandhaus made several recordings of the piano concertos; Eloquence returns to the earliest and least-familiar of them, made with the American pianist Misha Dichter in 1977 when he was a peerless exponent of Liszt, in performances that grab the listener by the scruff of the neck and never let go. ‘A first movement notable for its flowing pace and characterful orchestral colouring ... The second movement features the beautifully burnished sound of the Leipzig horns, followed by the strings’ deep, rich sonority toward the end ... The finale is another example of gorgeous orchestral sound.’ - Classics Today, July 2005 (Symphony No.4)

‘Misha Dichter plays the First Concerto with fierce concentration and lyric grace finely blended. Helped by first rate support from Masur and the Gewandhaus Orchestra, the impression his reading gives is one of long musical vistas finely focused.’ - Gramophone, September 1980 (Piano Concerto No.1)

‘The suave tonal opulence and technical brilliance of both Accardo and Schiff are unquestionably impressive in the Brahms Double Concerto.’ - Fanfare, September/October 1980 (Double Concerto)

With the exception of the Violin Concerto, all of the performances are captured in beautiful, natural sound (no evidence of early digital era harshness in the Hungarian Dances) that showcases the glories of this ensemble. Recommended as a fine introduction to the orchestral music of Brahms, or as a supplement to your all-time favorites of this repertoire.