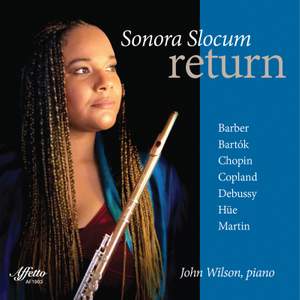 Barber: Canozone for Flute and Piano, Op. 38a

Duo for Flute & Piano: I. Flowing

Sonora Slocum was appointed Principal Flute of the Milwaukee Symphony Orchestra in 2012 at the age of 22 and has performed with orchestras around the country including guest principal flute with the Chicago Symphony Orchestra and the Orpheus Chamber Orchestra. She has appeared with the Philadelphia Orchestra on flute and piccolo. Her collaborations as guest principal include touring and audio recordings with the Orpheus Chamber Orchestra as well as visual recordings with the Philharmonia Orchestra of New York at Lincoln Center. Slocum has worked under such renowned conductors as Charles Dutoit, Christoph Eschenbach, Rafael Fruhbeck de Burgos, Sir Simon Rattle, Edo de Waart, Otto-Werner Mueller, John Williams, and David Zinman, among many others. A recent review stated that “Slocum has a HUGE sound...and a wizard’s bag resplendent with technical prowess and musical freshness.” The conception of this debut album, Return, stemmed from Slocum’s interest in astrology and reflected on this period of her life; her first Saturn Return. The tracks on this album represent both pivotal repertoire for flutists and some of the most technically demanding.