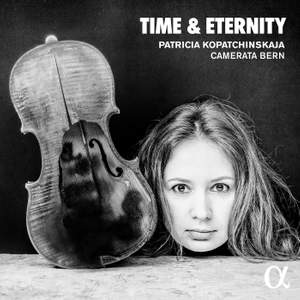 Camerata Bern accompanies the violinist on this latest foray into the meaning of life, the universe and everything. — BBC Music Magazine, November 2019, 5 out of 5 stars More…

Time and Eternity. Always in search of powerful musical experiences, the violinist Patricia Kopatchinskaja and Camerata Bern – of which she has just taken over the artistic direction – here juxtapose Hartmann’s Concerto funebre, composed in 1939 to express his indignation at the Nazis’ terror, and the Polyptyque for violin and orchestra that Frank Martin wrote in 1973 for Yehudi Menuhin, a work inspired by six scenes from the Passion of Christ painted by Duccio di Buoninsegna around 1310. The Kyrie from Machaut’s Messe de Nostre Dame, composed half a century after the altarpiece and heard here in an arrangement for strings, is interspersed between the movements, along with Bach chorales, ‘as an invocation of eternal consolation’. A Polish folksinger interprets the Jewish song ‘Eliyahu hanavi’, which expresses the hope of salvation and which Hartmann quotes in his concerto. Six hundred years of music to ‘make the victims’ voices heard’, says Patricia Kopatchinskaja. The album opens with Kol Nidrei by John Zorn (born 1953), in response to the eponymous prayer spoken by a representative of the Jewish community. A Catholic priest and an Orthodox priest also say a short prayer.

Camerata Bern accompanies the violinist on this latest foray into the meaning of life, the universe and everything.

This is very much a concept album and, as such, it needs to be listened to as programmed. Kopatchinskaja’s playing is daring in her use of extreme dynamics, sometimes down to a spidery whisper. She is never afraid to produce a harsh, uningratiating sound...but there is sweetness too, especially from Camerata Bern in those Bach chorales...Not easy listening, but strongly recommended.

None of the jumbling-up affects PatKop’s extraordinary skills, her willingness to embrace emotional extremes or the flair of her Camerata companions. And it certainly doesn’t touch the powerful, uninterrupted rendition of Karl Amadeus Hartmann’s Concerto funèbre of 1939, a work haunted by war horrors existing and foreseen. I just need to remember the Hartmann performance’s very existence among the well-meaning clutter.