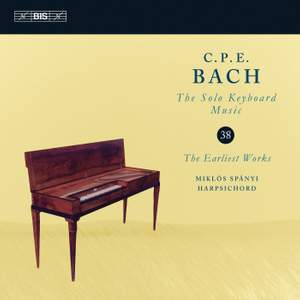 The liner notes are candid in admitting that ‘many of the pieces...demand little technical prowess or musical sophistication’. Prowess and sophistication, of course, a two attributes Spányi possesses... — BBC Music Magazine, December 2019, 4 out of 5 stars (Performance) / 5 out of 5 stars (Recording) More…

Carl Philipp Emanuel Bach was more systematic than many of his composer colleagues when it came to keeping track of his own works and made at least two catalogues of his compositions for solo keyboard. At various times he also destroyed manuscripts that remained in his possession, especially those of early works. But even so, there are a number of pieces that slipped through the net, and several of them can be found on this disc. A few of them were included anonymously into the second Clavierbüchlein for Anna Magdalena Bach, while Emanuel Bach was still living in his father's home in Leipzig. Among the pieces are some that have been identified as being by Bach only recently, during the ongoing work of producing a printed edition of the composers complete works. As devised by Miklos Spányi, the programme is a colourful mix of brief dance movements and other miniatures, provides both variety and insights into the formative years of the composer. It ends with Bachs Variations on a Menuet by Locatelli, the most technically demanding of his variation sets composed in 1735 when he was a young man of 21.

The liner notes are candid in admitting that ‘many of the pieces...demand little technical prowess or musical sophistication’. Prowess and sophistication, of course, a two attributes Spányi possesses in spades. Fortuitously since 46 short tracks – some less than a minute – invite a degree of forbearance.