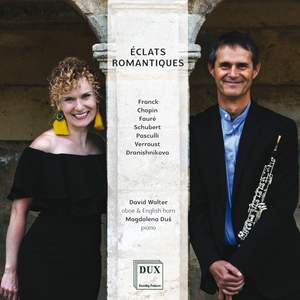 Dranishnikova: Poema for oboe and piano

<p>The album's core repertoire, performed by David Walter and Magdalena Dus, is a transcription for piano, oboe, and cor anglais of Cesar Franck's Violin Sonata in A major. Also included are a number of smaller pieces by Chopin, Faure, Schubert and others, presented in the original versions or in Walter's original arrangements. <p>David Walter has been associated with his home university, the Conservatoire National Sup rieur de Musique et de Danse de Paris, for over 30 years, where he runs chamber and oboe classes. As a laureate of prestigious competitions (including in Prague and Belgrade), he became a recognisable soloist all over the world. In addition to pedagogy and artistic career, Walter also deals with composition and conducting, which is confirmed by his numerous compositions, recorded together with pianist Magdalena Dus.