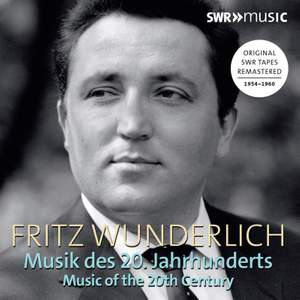 This is the 8th installment in the SWR CLASSIC series dedicated to Fritz Wunderlich. It contains never before released recordings as well as rarely performed repertoire worth discovering, brilliantly sung by one of the most talented tenors of all times. The esteemed German tenor, Fritz Wunderlich was no doubt enveloped in music at an early age. Urged to pursue classical voice training by theater people who heard him singing as they passed the bakery where he worked, the young Wunderlich was granted a scholarship to the Freiburg Music Academy in Breisgau by the town fathers. He studied there from 1950 to 1955, also studying the classical horn, which explains his almost supernatural breath control. After playing Tamino in a 1955 student production of W.A. Mozart's Die Zauberflöte, Fritz Wunderlich was engaged by the Wurttemberg State Opera in Stuttgart. His first professional role was as Ulrich Eislinger in Die Meistersinger. When he was called to play Tamino for an ailing Josef Traxel, Stuttgart had a new star and Fritz Wunderlich's short but amazing career had begun. During the remaining decade of his life Fritz Wunderlich gained the highest respect as a W.A. Mozart singer, lending lyrical brilliance to J.S. Bach, Schubert and Gustav Mahler and melodic tenderness to Bel Canto and light opera roles. Following such greats as Tauber and Schmidt, Wunderlich also devoted a good part of his time to the beautiful songs of such composers as Strauss, Lehár, Kálmán and Fall.