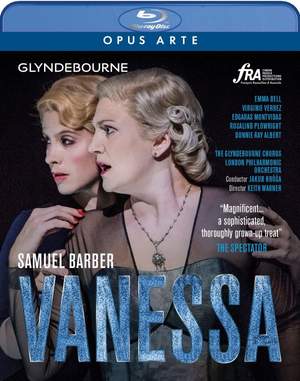 Veteran Rosalind Plowright, moving down from soprano to mezzo repertoire, is an effective Baroness; Edgaras Montvidas is a fine Anatol with a handsome presence, if not quite in Nicolai Gedda’s... — Fanfare, January/February 2020 More…

The Pulitzer-winning 1958 opera receives a vividly cinematic staging from Keith Warner in its first outing on DVD and Blu-ray, filmed at the Sussex festival last summer.

Abandoned by her lover Anatol, Vanessa retreats from the world, waiting and hoping with only her mother and her niece Erika for company. But when, 20 years later, Anatol’s handsome young son arrives unexpectedly, he shatters the calm of this shuttered household of women. Past and present love collides, and the aftershocks threaten to destroy them all.

Samuel Barber’s Pulitzer Prize-winning first opera boasts one of the 20th century’s most beautiful scores. Poised constantly on the edge of song, Vanessa unfolds in generous swathes of melody, rich in filmic strings and soaring brass, with echoes of Puccini, Berg and Strauss. It climaxes in a final quintet of Mozartean poignancy – one of the great ensembles of the contemporary repertoire.

Outstanding performances are a-plenty in this rare opportunity to see one of the 20th century’s great operas. This world premiere recording from Glyndebourne gives centre stage to Emma Bell who performs the titular role with an amazing intensity, with rising star Viginie Verrez and legendary Rosalind Plowright giving equally engrossing performances in this far too little-known masterpiece, in a new production by award winning director, Keith Warner.

Veteran Rosalind Plowright, moving down from soprano to mezzo repertoire, is an effective Baroness; Edgaras Montvidas is a fine Anatol with a handsome presence, if not quite in Nicolai Gedda’s league; Donnie Rae Albert is engaging as the Doctor (though again he is made to over-mug his inebriation for the announcement of Anatol’s and Vanessa’s engagement).

Warner’s handsome and perceptive staging of Barber’s Vanessa has probably done more to silence the work’s naysayers than any in recent memory…Thanks to Warner’s perception and motivation this excellent cast really deliver…Shadowy, opulent, effulgent – Barber’s Vanessa is the opera that bridges Hollywood and the Broadway stage.

Leading a splendidly responsive London Philharmonic Orchestra, Hrůša stays alert to the many ways in which Barber’s score subverts the convention expectations it seems to embrace…Bell acts with the requisite narcissistic passion and sings with security and point, but her timbre when full out emerges rather astringent…Plowright’s Old Baroness has dramatic presence to burn.

Ashley Martin-Davis’s sets and costumes reflect the tension between ‘dirt and elegance’ which Warner sees as central to the piece, as well as its preoccupation with illusion and ambivalence: this is a quite literally a world of smoke and mirrors, where everything has seen better days and perspectives can shift in the blink of an eye...The entire cast seems to feed off Bell’s nervous energy in the title-role: to borrow a line from Sunset Boulevard (one of several 1950s films obliquely referenced in the production), everyone here is ready for their close-up.

The acting is naturalistic and detailed and it all combines to make a satisfying emotional whole. Jakub Hrůša’s conducting adds to the Romantic sweep of the performance, and the cast is excellent.