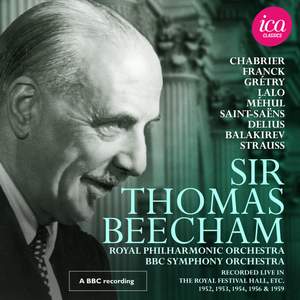 The RPO revels in the swift changes of instrumentation and the brief, quiet solos are brought off tenderly. — classicalsource.com, October 2019, 4 out of 5 stars

Méhul: Symphony No. 2 in D major

Balakirev: Symphony No. 1 in C major

This release has been sourced from the Richard Itter Archive of ‘live’ BBC recordings. The collection is very important for collectors because it has never been on the market before. Following the archive’s launch in October 2017 with successive releases featuring Beecham, Böhm, Cantelli, Casadesus, Karajan, Menuhin, Monteux, du Pré, Klemperer, Rostropovich and Walter, it has received universal praise from both the classical media and record collectors for the excellent sound and performances. Rob Cowan wrote in Gramophone about the first volume (ICAC 5148) featuring Sir Thomas Beecham: ‘numerous live Beecham releases have appeared over the last few years, some more successful than others (in both recording and performance terms), but this collection is certainly one of the best’. This second volume continues with rare performances which as far as is known have never been made available before covering a period from 1952 to 1959.

The RPO revels in the swift changes of instrumentation and the brief, quiet solos are brought off tenderly.