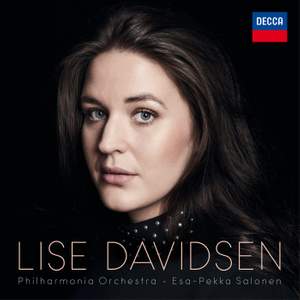 Davidsen is no ordinary singer. Throughout the whole album one marvels at the voice, its easy grandeur and sheer size, its steely focus and security… The timbre has a default cool beauty but... — Gramophone Magazine, June 2019 More…

The Norwegian lyric-dramatic soprano discusses her career so far and her debut album on Decca, out this Friday.

A selection of Richard Strauss’s most-loved lieder and songs, and Elisabeth’s arias from Wagner’s Tannhäuser, the role in which Lise Davidsen will make her debut at Bayreuth Festival. Plus Ariadne’s aria from Strauss’s Ariadne auf Naxos: her 2017 Glyndebourne debut in the title role was named “one of those ‘I was there’ moments” (The Times).

Lise Davidsen is the first Scandinavian soprano to sign to Decca since Birgit Nilsson, and the first Norwegian singer to join Decca since Kirsten Flagstad’s acclaimed recordings in 1950s. She is winner of The World Opera Competition, Plácido Domingo’s Operalia (2015), winner of The Queen Sonja International Music Competition (2015), and Gramophone Young Artist of the Year (2018).

Davidsen is no ordinary singer. Throughout the whole album one marvels at the voice, its easy grandeur and sheer size, its steely focus and security… The timbre has a default cool beauty but she can flood it with warmth to fill out a phrase magnificently. These gifts are matched by the maturity, honesty and integrity of Davidsen’s approach. This album only reinforces the fact that she is one of the greatest vocal talents to have emerged in recent years, if not decades.

The operatic extracts are the least effective…it’s in the more detailed and nuanced interpretations of the songs that one sense Davidsen well on the way to fulfilling her potential, whether in the varied Op. 27 collection, or the Four Last Songs – the latter a notable addition to an already super-rich discography.

Davidsen’s about far more than rafter-rattling decibels: the Prayer to the Virgin from Tannhäuser showcases her apparently limitless reserves of breath and capacity for singing of extreme inwardness, whilst Es gibt ein Reich demonstrates the complete seamlessness of her instrument, from a low A flat that would put many a contralto to shame to an upper register that unfurls gloriously in the aria’s final demanding stretches.

It’s not just the voice – though that is special in itself, gleaming and electric in tone, and buoyed by a seemingly endless supply of breath. It’s also the way she is able to create a still fulcrum even while all Wagner and Strauss’s orchestral manoeuvres churn around her...There is, however, perhaps room for a little more individuality if she wants to make the iconic Four Last Songs truly her own.

[Her voice] is an astonishingly strong and flexible one, easily encompassing the sonorous depths and soaring flights needed for the Four Last Songs and other Strauss treasures...Davidsen’s gale-force salutation in the Tannhäuser aria Dich, teure Halle, the opening track, left me breathless: she isn’t a lyric dramatic soprano for nothing.

Davidsen releases her debut album amidst a welter of publicity, and on the whole it is a success. She repeats her competition-winning aria, ‘Dich teure Halle’ (Tannhäuser) to thrilling effect, floats the prayer from the same opera, and gives us a grand and generously sung account of Strauss’s Ariadne. Continuing with that composer she offers some lieder, concluding with the Four Last Songs. Davidsen’s voice is undeniably voluminous and rich, focused and unforced.