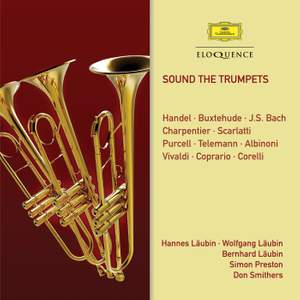 Handel: Air and Variations in B-Flat Major (Arr. for 3 Trumpets and Organ by Richard Franko Goldman)

Purcell: Sound the Trumpets in F Major (Arr. for 3 Trumpets and Organ by Allen Ostrander)

Albinoni: Concerto in B-Flat Major for Trumpet and Orchestra

Excerpt,  Viviani: Sonata No. 1 in C major for trumpet and organ

In Baroque works generally, the trumpet is always accompanied by drums, both of these instruments having strong associations with military music. The organ, on the other hand, is primarily associated with the church, and it is within the pageantry and rituals of divine worship that the combination of trumpets, timpani and organ comes most splendidly into its own. The repertoire on these recordings includes fine examples from the German, French, Italian and English schools, mixing original works and arrangements, jubilant fanfares with arias of liquid beauty.

It is especially fitting that there should be two works by Buxtehude, who was for so many years organist at the Marienkirche in Lübeck. In the city’s central Dom, Preston was joined by the three prodigiously talented, twenty-something Läubin brothers to make ‘Awake the trumpet’s lofty sound’ in 1985. Five years later they were reunited at the studios of Abbey Road in London to record Italian and German concertos full of stately proclamations and brilliant figuration.

Back in 1968, Preston had scored a commercial and artistic hit for Argo with ‘Music for trumpet and cornetto’, a collection which ventured into little-known pre-Baroque territory and presented the uniquely rounded sonority of the cornet, the trumpet’s forebear, for the first time on record. The soloist was the American Don Smithers, who had only begun to learn the trumpet a decade previously but rapidly made an international reputation as a trumpeter of astonishing security and virtuosity, especially in the early-music repertoire.

‘The Läubin brothers form a fine ensemble, and the organ has magnificent clarity and quality of sound … the performances are superb in this most enjoyable celebration of noble sounds and music.’ Gramophone, March 1987 (‘‘Awake the trumpet’s lofty sound’)

‘The solo playing and the partnership with the ECO are so well managed that this disc is almost irresistible.’ Gramophone, December 1991 (Trumpet Concertos)