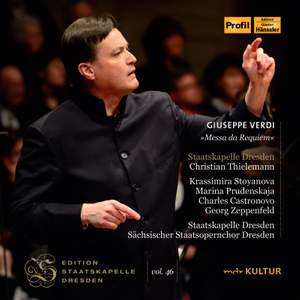 We find Thielemann balancing the operatic and the ecclesiastical superbly, pacing Verdi’s score unerringly…while the conductor is superb in the more reflective passages of the work, he is no... — Gramophone Magazine, June 2019 More…

The Verdi Requiem in Memory of the Destruction of Dresden on February 13, 1945 The Requiem concerts of the Dresden Staatskapelle on Dresden Memorial Day maintain a long tradition. It is 68 years now since February 13, 1951, when Rudolf Kempe, at that time General Music Director of the Dresden Staatsoper and Principal Conductor of the Dresden Staatskapelle, conducted the Messa da Requiem by Giuseppe Verdi, the first Requiem to be performed on this day in remembrance of the bombing of Dresden in February 1945, during which many thousands perished within the space of a few hours and large parts of the city were destroyed. The effects of the war were everywhere to be seen in Dresden in 1951; heaps of rubble dominated the city. The presentation of the Verdi Requiem in the Large Auditorium of the Staatstheater - the present-day Schauspielhaus - left a deep impression on those present, who listened in awed silence.

We find Thielemann balancing the operatic and the ecclesiastical superbly, pacing Verdi’s score unerringly…while the conductor is superb in the more reflective passages of the work, he is no less impressive when it comes to the fire and brimstone…[The Staatskapelle] play with the expected virtuosity. The strings are silky and agile, and there’s supreme musicality in the solo work… Highly recommended.

This deserves to be placed in the elevated company of the classic Giulini.