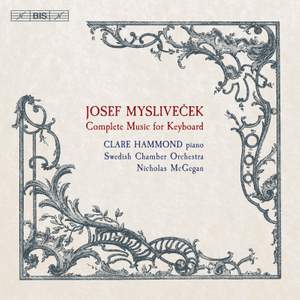 Myslivecek: Keyboard Concerto No. 1 in B flat major

No. 1 in F Major. Andantino

No. 2 in A Major. Allegro ma non troppo

No. 4 in B-Flat Major. Andantino

No. 6 in C Major. Andantino

The British pianist and Royal Philharmonic Society Award-winner talks to Katherine about reconstructing and recording the piano concertos of the Czech composer with the Swedish Chamber Orchestra and Nicholas McGegan.

Born in Prague in 1737, Josef Myslivecek spent most of his short life in Italy, where for a while he enjoyed success with his many operas, and became known as ‘Il Boemo’ (‘The Bohemian’). It was also in Italy – in Bologna – that he first met Mozart, in 1770. Their paths would cross again and in letters Mozart wrote about him with affection, describing him as full of ‘fire, spirit and life’. Myslivecek’s output for keyboard has been somewhat neglected, something which the English pianist Clare Hammond seeks to rectify with her latest disc. The keyboard concertos in particular have barely seen the light of day since Myslivecek’s death and the second concerto is recorded for the first time on this disc which gathers all of the extant keyboard works. Clare Hammond, whose imaginative recording projects on BIS have received international acclaim, is here supported in the concertos by the Swedish Chamber Orchestra, conducted by no one less than Nicholas McGegan, whose expertise in 18th-century style is undisputed.

The music of Josef Myslivecek (1737-81) is exquisitely crafted and offers bracing freshness, nowhere more than in the First Concerto. The score states ‘cembalo’, probably meaning fortepiano, but Hammond’s Steinway works beautifully. Her playing is always neat and particularly suits the cleanliness of the finales. The Second Concerto is slightly more ambitious: here the Scottish Chamber Orchestra offers joyous contributions, while Hammond spins a web of beauty in the central Larghetto.

We not only get the composer’s complete keyboard output neatly in one place, expertly performed, but can hear the world premiere recording of his Second Piano Concerto.

Clare Hammond’s impeccable musicianship and BIS’s refined engineering make for a compelling team in this attractive production. The Swedish Chamber Orchestra has a rich sound and Nicholas McGegan is a sensitive collaborator in the concertos.

The two compact concertos have a sparky grace that comes across buoyantly in these performances...Schnabel’s old adage about Mozart’s piano sonatas – “too easy for children, and too difficult for artists” – would come to mind for Mysliveček’s Divertimenti, were it not for the perfectly judged tone that Hammond strikes with them, preserving their seemingly artless charm while finding a striking profundity in their simplicity.

Sprightliness abounds in the concertos and short pieces gathered here, delivered with deliciously unfussy poise and elegance on a modern Steinway, crisply supported by the Swedish Chamber Orchestra and the conductor Nicholas McGegan.