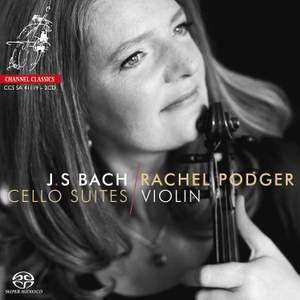 A spellbinding set that is arguably Podger's finest recorded achievement to date...Music that one thinks of instinctively as boldly-etched, deeply (in every sense) introspective and eliciting... — BBC Music Magazine, July 2019 More…

The violinist talks to David about her new album, which sees her perform JS Bach's popular cello suites on the violin.

The baroque violinist's own transcriptions of one of the pinnacles of the cello repertoire have an integrity and intelligence that's entirely convincing on its own terms, and the music never stops dancing.

'Since, I have spent a fair bit of time coaching cellists, both modern and baroque alike, and found myself playing along to demonstrate various points I gradually could feel these pieces joining the violin partitas and sonatas as another kind of ‘daily bread’; I started catching myself playing some of the movements I particularly loved while warming up, and realising that it was actually possible to play them on the violin, and to find a special expressive vocabulary at the higher pitch.

How could one possibly justify it, especially with works that have peppered the recording catalogue with some of the most iconic and adored string performances of all time, the Casals, Fourniers, Torteliers or Starkers? But what I was doing also seemed very much in keeping with Bach’s own habit of recycling his own compositions for different instruments and different uses. The examples are endless but I immediately think of the concertos appearing as sinfonias in cantatas, or concertos for violins turned into harpsichord concertos.

The more I reflect, the less I feel the need to be defensive because Bach did far more outrageous things! Think of the Prelude of the E major Partita for violin turned into a full orchestral cantata movement with trumpets and drums…' (Rachel Podger)

A spellbinding set that is arguably Podger's finest recorded achievement to date...Music that one thinks of instinctively as boldly-etched, deeply (in every sense) introspective and eliciting a melancholic sense of struggle, becomes more dance-like, airy and freewheeling.

Podger adopts the Suites with bravura and the confidence that while their nature may change, their stature will not be diminished… Shorter strings allow for graceful ornamentation of gigues beyond the reach of even the most fleet-fingered cellist… whereas the sarabandes demand all of Podger’s bow control and even then their essential gravity is necessarily modulated with the smile of a more flowing pulse.

Reclothed in the brighter colours of D major, the opening Prelude of the ‘G major’ Suite shimmers with an unfamiliar, iridescent beauty that’s as disconcerting as it’s beguiling…Like many of my most treasured interpreters Podger never draws undue attention to the mechanics behind the music. She clearly knows and loves its every contour as well as any cellist...Neither Podger nor I would advocate that you banish your Rostropovich, Casals or Fournier, but anyone who loves these endlessly rewarding works should give this recording a whirl.

In Podger’s hands they sound altogether new, not like a higher-pitched copy of the familiar cello works but like something written for her own instrument...Played on the cello, these sets of stylised dances sit companionably with you beside the ballroom floor. Here, on the violin, they drag you up on to your feet and whirl you around. That’s partly to do with the buoyancy of Podger’s playing, full of agile twists and turns, and partly because some movements naturally flow faster on the violin.