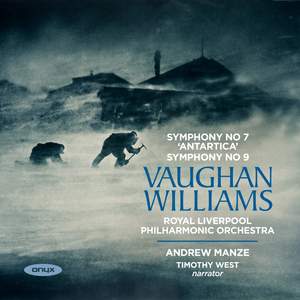 One big paragraph after another grows and surges unerringly. There are fine individual contributions too. Timothy West’s vivid reading of the superscriptions to each of the Sinfonia antartica’s... — BBC Music Magazine, August 2019, 3 out of 5 stars (Performance) / 4 out of 5 stars (Recording) More…

Recording of the Week,  The final instalment of Andrew Manze's Vaughan Williams cycle with the Liverpool Philharmonic

Andrew Manze and the Liverpool Philharmonic round off their Vaughan Williams series with vivid accounts of the majestic seventh and pensive ninth symphonies.

The final volume in the RLPO/Andrew Manze Vaughan Williams Symphony cycle contains ‘Sinfonia Antartica’ No.7 and his final enigmatic symphony, the 9th. The 7th drew its inspiration from music RVW had composed for the film ‘Scott of the Antartic’, though very little of that score actually made it to the symphony. This often mis-understood work is a true symphony that draws on themes from the film. The composer headed each movement with a literary quotation, and these are narrated on this recording by the distinguished actor Timothy West, following in the footsteps of Sir John Gielgud and Sir Ralph Richardson. The 9th symphony dates from his final years and shows no trace of any creative decline. It is a challenging forbidding work and if music could be hewn from granite, then this symphony is a supreme example. RVW initially thought of a programme based on Thomas Hardy’s ‘Tess of the d’Urbevilles’, but characteristically denied this. However his manuscripts show otherwise!

One big paragraph after another grows and surges unerringly. There are fine individual contributions too. Timothy West’s vivid reading of the superscriptions to each of the Sinfonia antartica’s five movements avoids bombast, and Rowan Pierce’s wordless soprano sounds at once haunting and depersonalised, exactly as required.

Anyone listening to this recording will be thrilled to hear so much detail…and the pathos of Timothy West’s recited literary quotations from the head of each movement provides just the right amount of emotional entrée…For any Vaughan Williams lover, this series of recordings is well worth the acquaintance for its probing, sympathetic interpretations and beauty of sound.

Manze has evidently made a conscious decision to draw out those more mechanical-sounding edges [in the Antartica] to the sound….[Pierce] tips the balance towards a warmer, more human sound-world, where previous interpretations have tended to play up the ethereal, otherworldy aspect of the polar setting...it’s a set truly worthy of mention in the same breath as the venerable cycles by Vernon Handley and Richard Hickox/Andrew Davis.