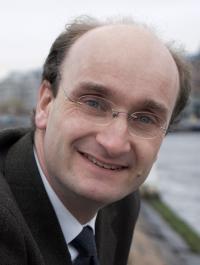 English violinist and conductor Andrew Manze was born in Beckenham in 1965 and read Classics at Cambridge, before beginning his performing career in early music; he was appointed Associate Director of the Academy of Ancient Music in 1996 and served as Artistic Director of the English Concert from 2003 to 2007.

His extensive discography as a violinist (mainly on Harmonia Mundi) includes the Corelli Violin Sonatas Op. 5 with Richard Egarr (‘if you care at all for the baroque repertoire or fine fiddle playing, you owe it to yourself to hear these exhilarating performances’ – Record Review), Biber sonatas with Romanesca and Pandolfi Mealli’s Violin Sonatas with Egarr (winner of the Baroque Instrumental category at Gramophone Awards in 1995 and 2000 respectively), and Vivaldi concertos with Christopher Hogwood and the Academy of Ancient Music.

Manze works regularly with the Royal Liverpool Philharmonic Orchestra, with whom he has recorded a widely acclaimed series of the Vaughan Williams symphonies on Onyx; the cycle drew comparisons with Boult from BBC Music Magazine and was described as ‘essential listening’ by The Observer. His complete Mendelssohn symphonies with the NDR Philharmonie on Pentatone has also attracted critical praise, with the Sunday Times describing his approach as ‘both contrasting and revelatory’.

Find out more at https://en.wikipedia.org/wiki/Andrew_Manze