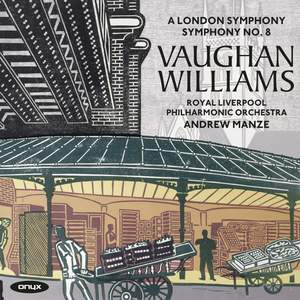 Recording of the Week,  Andrew Manze begins a cycle of symphonies by Vaughan Williams

Andrew Manze has established himself as one of the leading interpreters of Vaughan Williams Symphonies. His 2012 BBC Proms performances drew critical acclaim, and were highlights of that season's Proms. ONYX Classics will release one volume a year, completing the cycle in the spring of 2019 with Symphonies 7&9. It was RWV’s friend and fellow composer George Butterworth who in 1912 suggested he write a purely orchestral symphony. RVW told him he had absolutely no plans to do so, but Butterworth was a very perceptive friend and colleague, and the premiere took place in 1914. Called ‘A London Symphony’ (RVW considered himself a Londoner), RVW thought a better title would be ‘A Symphony by a Londoner’. On New Year’s Eve that year RVW joined the army and went to the trenches in France. Butterworth would be killed by a sniper at the Somme in 1916. The 8th Symphony of 1955 is a tightly written, brilliant and innovative work that shows RVW’s creativity at full stretch. Although outwardly a sunny work, shadows of the 6th and 7th symphonies lurk in the background at points throughout this brilliant symphony.

Next in the RVW Symphony cycle from Andrew Manze and the RLPO will be Symphonies 3 & 4 [ONYX4161] to be released in March 2017.

This is expressive and atmospheric playing, rarely heard since Boult.

Manze’s agreeably vigilant reading of A London Symphony brings much to admire in its clean-cut, unexaggerated demeanour…and the spruce performance of the Eighth likewise reveals Manze as a stylish and committed interpreter. In the ravishing Cavatina for strings alone…[offers] heartwarming lyricism

All in all these are terrific performances and convincing interpretations … I can’t wait for the next instalment.

Vaughan Williams' orchestration is fantastically colourful – he had studied with Ravel a few years previously, and clearly took great inspiration from him both in terms of harmony and in terms of instrumentation – and Manze brings its subtleties out in a way I've never heard anyone else quite manage before.

Manze keeps a tight rein but lets the music blossom. The RLPO and its excellent soloists make a warm, lustrous sound.

Remove the encrusted nostalgia for yesteryear that we normally hear in today’s performances and you have Andrew Manze’s virile and colourful account of the Second Symphony, London here bustling with colourful vitality.Tempos are unusually brisk in the outer movements, his wide dynamic range magically capturing the pianissimo passages elsewhere.

Manze might be best known as a Baroque specialist, but his Vaughan Williams is as charismatic and affectionate as any on disc...Exquisite played by the RLPO strings too. Manze never puts a foot wrong … Tremendous music and a really recommendable, enjoyable disc.

if you don't know RVW's A London Symphony and Eighth Symphony, these performances – by turns passionate, dramatic and clear-sighted –would make an ideal introduction. The characteristics of both works are formidably presented, and Manze's unfussy and strong direction is just what is needed.