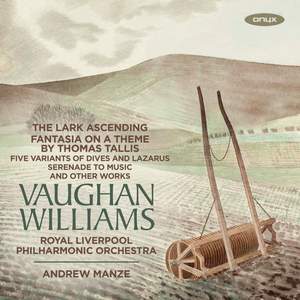 Vaughan Williams: The Lark Ascending & Fantasia on a Theme By Thomas Tallis

The success-level here is excellently high. Collectors will savour a genuine rarity: the composer’s own orchestra-only arrangement of the Serenade to Music…the music sounds as rapturously beautiful... — BBC Music Magazine, Christmas 2019, 5 out of 5 stars More…

Following their hugely successful cycle of Vaughan Williams’ nine symphonies, the Royal Liverpool Philharmonic Orchestra is led by Andrew Manze in this album of the composer’s most popular shorter orchestral works.

This disc features Fantasia on a Theme by Thomas Tallis, Fantasia on Greensleeves, The Lark Ascending and The Five Variants of Dives and Lazarus, as well as the rarely performed orchestral version of The Serenade to Music.

The success-level here is excellently high. Collectors will savour a genuine rarity: the composer’s own orchestra-only arrangement of the Serenade to Music…the music sounds as rapturously beautiful as ever, and Manze’s conducting gets a handsome orchestral response. Variants on Dives and Lazarus can sometimes come across as a semi-routine creation, but not with the beautifully shaded string orchestra textures conjured here…Similar care has been taken, too, with the Tallis Fantasia.

The clarity of James Ehnes’s playing, with virtually flawless intonation, is relaxed and profoundly lyrical…The strings of the RLPO have a rich purple hue and Manze’s control of the balance of the orchestra’s rounded tone is beautifully judged and symptomatic of the deep sympathy he has for this music and these treasured scores. For all Vaughan Williams ‘Liebhabers’, this is a must!

The very highest standards of performance and musicianship can be found in these recordings, with particular mention going to James Ehnes's flawless, vibrant and lyrical violin playing. A must-have recording for your collection.